Budgetary cuts are making it “more difficult” for the police service to engage with crime victims as support for prosecutions plummets, a former Home Secretary has warned. 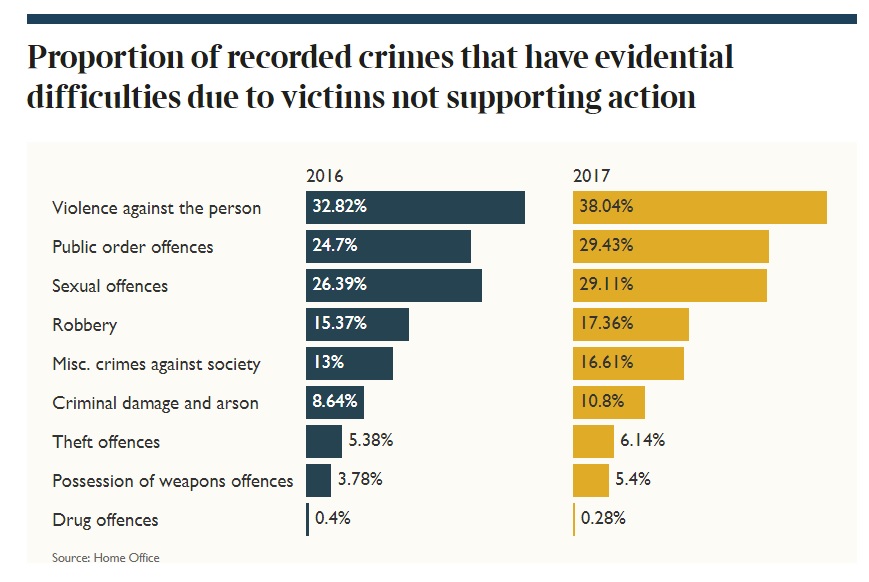 Budgetary cuts are making it “more difficult” for the police service to engage with crime victims as support for prosecutions plummets, a former Home Secretary has warned. The growing number of unsolved crimes is being attributed to victims unwillingness to co-operate with force investigations. That number of cases when there was a “failure to support” a prosecution has jumped by 224,000 over the past year. The figures from the Home Office include 127,000 violent offences and over the past 12 months the proportion of those recorded crimes that have evidential difficulties due to victims not supporting action increased by 15 per cent. And now the blame for the rise has been placed on stretched resources with victims increasingly giving up reporting incidents, as officers reportedly struggle to attend crime scenes, take witness statements and collect evidence. This problem is now happening on Amber Rudds watch, but it has been caused by cuts forced through by her predecessor, Theresa May, said ex-Home Secretary Alan Johnson. The cuts are making it more difficult for police to engage with victims, which is crucial to allow investigations to proceed. Victims` Commissioner Baroness Newlove was shocked that officers had blamed so many failed cases on victims and said it was vulnerable people themselves who were in desperate need of support from the police. When I meet victims, many express concern that they will not be protected if the perpetrators are apprehended. Hence their reluctance to support the police, said Baroness Newlove, whose husband, Garry, was murdered by a gang of teenagers in 2007. If vulnerable victims are to receive justice, they must have confidence that they will always be supported when they report a crime. These figures suggest we have a long way to go. In a report issued earlier this year, Her Majestys Inspectorate of Constabulary and Fire and Rescue Services found officers were allowing perpetrators of domestic violence to escape justice by pushing responsibility for prosecutions onto the victims, rather than building cases themselves. Last week the Home Office revealed an annual rise of more than 500,000 police recorded crimes in the year to June. The statistics, which do not cover fraud offences, included an eight per cent rise in the murder rate, a 27 per cent rise in gun crime, 26 per cent increase in knife crime with sexual offences up by 19 per cent. Sarah Newton, a Home Office minister, said the Crime Survey for England and Wales shows a nine per cent fall in crime in the year to the end of June. She added that experts believe the survey is the best measure of long-term crime trends.