New York terror suspect: I plotted my Daesh-inspired killing spree a year ago

The alleged New York terror truck attacker has told investigators that he was inspired by the so-called Islamic State (Daesh) and planned on continuing his killing spree. 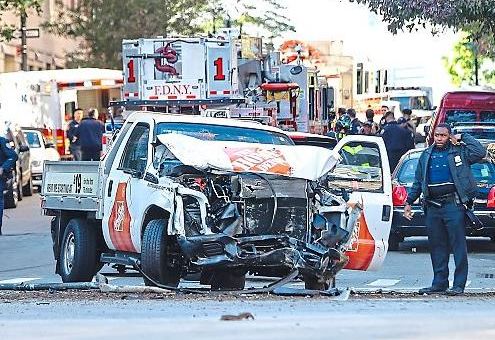 The alleged New York terror truck attacker has told investigators that he was inspired by the so-called Islamic State (Daesh) and planned on continuing his killing spree. Sayfullo Saipov told FBI officers that had he not been stopped he intended to claim more victims on the Brooklyn Bridge  indicating that he “felt good about what he had done.” The Uzbek immigrant, accused of the attack on a New York cycle path in which at least eight people died, has been charged with providing material support to a terrorist group and violence and destruction of motor vehicles. He appeared in the New York federal courthouse in a wheelchair, handcuffed and with his feet shackled, and was ordered to be remanded in custody. His lawyers said they were not seeking bail, and Mr Saipov did not enter a plea. A judge set his next court date for November 15. The court heard how the suspect spoke to investigators from his hospital bed, where he is recovering from gunshot wounds he received when a New York Police Department officer shot him near Chambers Street in lower Manhattan. At least eight people are dead after the attack, in which a pickup truck crashed through people on a bike path that runs alongside the west side of Manhattan. Mr Saipov told investigators that he had chosen to mount vehicle assault on Hallowe`en because he knew that there would be a lot of people on the streets, and that his plan was to kill people on the West Side Highway and then “proceed to the Brooklyn Bridge to strike pedestrians”. Details of Mr Saipov`s plans have emerged two days after the attack, including reportedly requesting a Daesh flag be hung in his hospital room, and that he had 90 videos and 3,800 photos of extremist propaganda  as well as images of violent beheadings  on his cell phone. Just weeks before the Manhattan attack, Mr Saipov had searched “Halloween in NYC” online, and had practised making turns with the rented truck so that he would be familiar with the vehicle. Mr Saipov left behind knives and a note, in Arabic and English, that included Islamic religious references and said, “Islamic Supplication. It will endure,” FBI officer Amber Tyree said in court papers. “It will endure” commonly refers to daesh, Ms Tyree said. Questioned in his hospital bed, Mr Saipov said he had been inspired by Daesh videos and began plotting an attack about a year ago, deciding to use a truck about two months ago, Ms Tyree said. Mr Saipov rented a truck on October 22 to practice making turns, and he initially hoped to get from the bike path across lower Manhattan to hit more pedestrians on the Brooklyn Bridge, Ms Tyree said. He even considered displaying Daesh flags on the truck during the attack but decided it would draw too much attention, authorities said Six of the victims died at the scene and two more in hospital. At least a dozen people were injured.