Four police officers were hailed as heroes for pinning an alleged terrorist to the ground after his crude home-made bomb with a detonator made from Christmas lights went off at the worlds busiest transport hub. 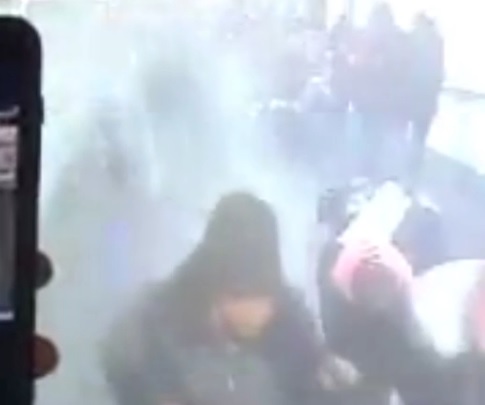 Four police officers were hailed as heroes for pinning an alleged terrorist to the ground after his crude home-made bomb with a detonator made from Christmas lights went off at the worlds busiest transport hub. The New York Police Department (NYPD) officers jumped on top of Akayed Ullah in a subway underpass between Times Square and Port Authority Bus Terminal when his explosive device blew up, sending smoke everywhere and causing mass panic. The officers even grabbed a mobile phone from the 27-year-old terror suspects hand which they feared he could use to trigger another blast  and tore the pipe bomb-style device off his chest. Bangladeshi Mr Ullah, 27, who has been charged with criminal possession of a weapon, a support act of terrorism and making a terroristic threat, is being treated as a lone wolf by NYPD anti-terrorism officers. It is thought he carried out the failed attack during Monday (December 11) mornings rush hour after becoming radicalised online by Islamist propaganda. He allegedly fashioned his device out of a 12-inch length of pipe stuffed with match heads, sugar, a battery and Christmas lights as the trigger. The former cab driver set the device off around 7.20am, causing a stampede as people tried to flee. Port Authority police officer Anthony Manfredini, 28, a former Marine, ran towards the smoke and found Mr Ullah on the ground with visible wires coming from his jacket into his (trousers), according to police union spokesperson Robert Egbert. Mr Egbert said that three officers followed  Jack Collins, 45, Sean Gallagher, 26, another former Marine, and Drew Preston, 36, a US Army veteran who served in Iraq and Afghanistan  arriving just as the suspect was reaching for a cellphone. The officers dived and wrestled it from him, fearing he could be about to trigger the device again. Mr Egbert said: These officers went into this situation blind, only becoming aware of the danger involved once they confronted the suspect. Port Authority chairman Kevin OToole added: Thanks to the quick response of these brave officers, the suspect was apprehended, there were no serious injuries. Our officers responded immediately and put themselves in harms way to protect the public. The men were also praised by the White House. These brave first responders and others who rushed to the scene are heroes, White House Press Secretary Sarah Huckabee Sanders said. The terminal, on 42nd Street, which is the largest in the world, sees 232,000 people pass through it every day  85 million travellers a year. The terror suspect is being treated for severe wounds. Four people, including a police officer, suffered minor burns in the incident. Officers picked up Akayed Ullahs wife, Jannatul Ferdous Jui, along with her parents from a neighbourhood in the Bangladeshi capital, Dhaka, on Tuesday afternoon (December 12) for questioning. Initial reports suggested the device blew up prematurely, but an NYPD spokesperson said they had video footage showing him connect the wires. In a statement President Donald Trump said that the attack was further evidence of the flawed system of immigration which he said he was working to improve. The president recently gained the backing of the Supreme Court for his controversial travel ban  which plans to restrict entry to people from eight majority-Muslim countries. Mr Trump said: America must fix its lax immigration system, which allows far too many dangerous, inadequately vetted people to access our country.