The man accused of killing eight people by driving a rented van down a busy New York cycle path was an Uber taxi driver who may have lived in New Jersey after emigrating from Uzbekistan seven years ago. 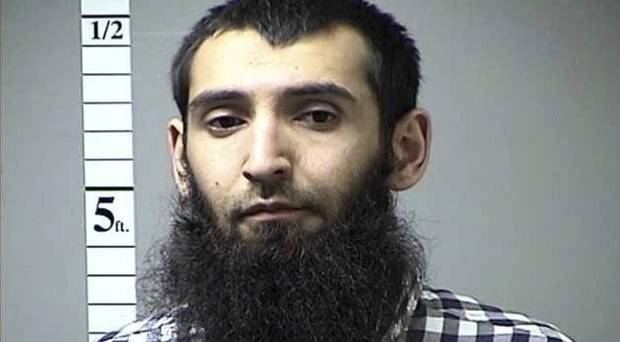 The man accused of killing eight people by driving a rented van down a busy New York cycle path was an Uber taxi driver who may have lived in New Jersey after emigrating from Uzbekistan seven years ago. Officials have confirmed it was a terrorist attack  the deadliest in New York City since September 11, 2001. At least a dozen other people were injured in the incident in Lower Manhattan, a few streets from the World Trade Center memorial, which echoes Londons three deadly vehicle attacks earlier this year. The terror suspect collided with a school bus carrying adults and children before getting out of the truck brandishing what turned out to be two fake handguns and reportedly shouting Allahu Akbar (God is great). He was shot by a police officer in the stomach and arrested, New York City Police Commissioner James ONeill said. The New York Police Department (NYPD) has released an image of the suspected attacker, named locally as Sayfullo Saipov, 29, who is now in custody. He is said to have left a note pledging allegiance to the so-called Islamic State (Daesh) in or near the truck. Uber said it was horrified by this senseless act of violence and confirmed that Mr Saipov was one if its drivers. It said he passed a background check and had been actively driving on the platform for more than six months. On Wednesday (November 1), Uzbekistan President Shavkat Mirziyoyev offered his condolences to US President Donald Trump and the families of the victims. Six people died at the scene of the attack, and two others were pronounced dead after being taken to a local hospital. This was an act of terror, and a particularly cowardly act of terror aimed at innocent civilians, New York Mayor Bill de Blasio said. We know that this action was intended to break our spirit. In a statement President Donald Trump praised the actions of the first responders and tweeted that the incident looks like another attack by a very sick and deranged person. He said law enforcement was following the attack closely. The president also tweeted: We must not allow ISIS to return, or enter, our country after defeating them in the Middle East and elsewhere. Enough. Prime Minister Theresa May tweeted that she was appalled by this cowardly attack, adding: My thoughts are with all affected. Together we will defeat the evil of terrorism. UK stands with #NYC. While no terror group has yet laid claim to the attack, New York and other cities around the globe have been on high alert against attacks by extremists in vehicles. Daesh has released detailed instructions on carrying out vehicle attacks while intensifying calls for global atrocities as its territories shrink in Syria and Iraq. The first terror attack using a lorry came in Nice, where a Daesh supporter killed 86 people in July 2016. In December last year, an attacker drove a lorry into a crowded Christmas market in central Berlin, killing 12 people and injuring 56 others. This year in London vehicles have been used in attacks at Westminster, London Bridge and Finsbury Park  claiming a total of 14 civilian lives including that of PC Keith Palmer. Vehicles have also been used in attacks in Berlin, Stockholm, Paris, Spain and the Canadian city of Edmonton.