Officers tackling paramilitary-related crime in Northern Ireland have been joined by law enforcement colleagues to create a new specialist unit. 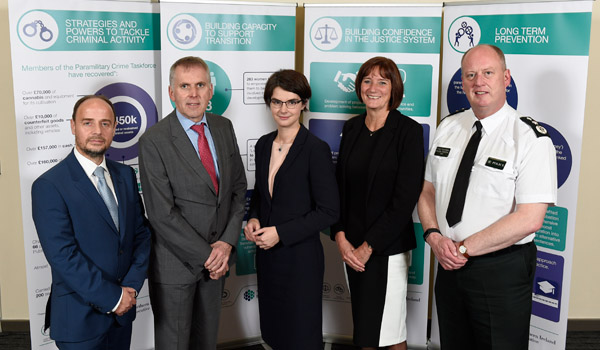 Officers tackling paramilitary-related crime in Northern Ireland have been joined by law enforcement colleagues to create a new specialist unit. Forty Police Service of Northern Ireland (PSNI) officers will work alongside the National Crime Agency (NCA) and HM Revenue and Customs in the Paramilitary Crime Taskforce. The unit will investigate crimes including extortion, intimidation, violence and drug dealing linked to paramilitary gangs and will have a range of covert capabilities, the NCA said. It will be funded by £25 million over the next five years provided by Westminster and Stormont. Lynne Owens, Director General of the NCA, said: The NCA and its partners will use every law enforcement tool and power, and intelligence sharing opportunity available, to disrupt paramilitary-related criminal activity which has such a significant impact on many communities and individuals. We will play a full and proactive part in this taskforce on behalf of all communities across Northern Ireland. I am proud of the contribution the NCA has already been able to make to this work, and I look forward to seeing the taskforce go from strength to strength. PSNI officers have already been working on the initiative for the last year but have now been joined by 22 NCA staff and ten from HMRC. Around 100 people were arrested for paramilitary-related crime in Northern Ireland last year and 66 were charged. Officers seized £450,000 in criminal assets, along with guns, ammunition and explosives. Chief Constable George Hamilton said that many of the approximately 100 organised crime groups in the country take part in paramilitary activity. We prioritise against the threat risk and harm that they pose to communities, he said. We simply go where the evidence is and where the intelligence takes us, so that reaches us into most of the paramilitary groups. We dont get too concerned about what the label is, its the harm that theyre causing in communities that we want to disrupt and reduce.