The EU is to develop a smart antenna that can be integrated into the uniforms of police and emergency services so that the location of officers can be precisely pinpointed in an emergency.

The EU is to develop a smart antenna that can be integrated into the uniforms of police and emergency services so that the location of officers can be precisely pinpointed in an emergency.

Sofant Technologies, specialists in miniaturised smart antennae technology, will be part of the two-year, 1.5 million euro ARMOURS project to contribute to the development of Galileo PRS (Public Regulated Service).

As part of a consortium, Sofants role on the ARMOURS project is to develop low cost miniature steerable antennae that can be incorporated into portable devices, including smartphones, as well as the clothing and uniforms used by police, intelligence services, customs officials, coast guards, peacekeeping forces and rescue teams.

This new affordable multi-frequency receiver technology is intended for future use with Europes Galileo satellite navigation system that has been developed as an alternative to the US controlled GPS system.

The Galileo system is solely European-controlled and will deliver a number of navigation services, including an open service for the public, a commercial service and an encrypted service for government authorised users (namely PRS) with a critical need for a robust, secure, continuous positioning service including the police, security, defence and rescue services. The encrypted service offers extra protection against the threat of disruption from cyber-terrorism and other malicious interference.

Jointly funded by the GSA (European GNSS Agency) and the EU as part of the FP7 programme, the ARMOURS (Antenna and fRont-end MOdules for pUblic Regulated Service) project will be delivered by a powerful consortium of European technology players operating beyond the cutting-edge of their respective fields.

Bobby on a Segway 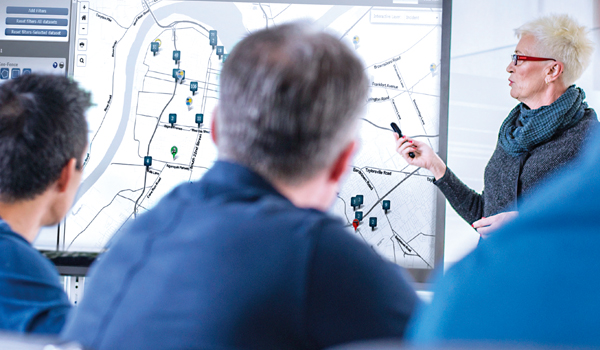