A far-right terror suspect has been charged with an alleged plot to assassinate Emmanuel Macron in front of Donald Trump. 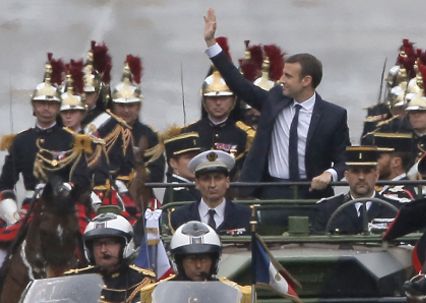 A far-right terror suspect has been charged with an alleged plot to assassinate Emmanuel Macron in front of Donald Trump. The unnamed 23-year-old Frenchman from the suburb of Argenteuil near Paris was foiled when he tried to buy a Kalashnikov assault rifle online. He is being held in custody after allegedly planning to kill the newly-elected French leader during the capital`s Bastille Day military parade on July 14, scheduled to be attended by the US president. The man was indicted with terrorism offences last Saturday (July 1), with details of the case released to the French media on Monday (July 3). According to reports, the man, who describes himself as a nationalist and follows the ideology of the far right, came to the attention of intelligence services after he was identified from a conversation he had online. According to French radio station RMC, he used a chat room linked to an online game to express his desire to obtain a Kalashnikov rifle. His words were then reported to a government website that allows members of the public to inform authorities of suspicious activity. Three kitchen knives were found in his vehicle and analysis of his computer found that he had conducted internet searches on potential targets. Under questioning the man admitted he wanted to make a “political statement” by killing the president during the parade on France`s national day. He also admitted to officers he wanted to attack “blacks, Arabs, Jews and homosexuals,” RMC stated. French prosecutors` office spokesperson Agnes Thibault-Lecuivre said the suspect`s plans were vague and not yet finalised, adding he appeared to have been acting alone. The would-be attacker was convicted for condoning terrorism in 2016 and sentenced to three years in prison, of which 18 months were suspended. He had applauded neo-Nazi mass murderer Anders Behring Breivik, who killed 77 people in a bomb and gun rampage in 2011 in Norway. In 2002 neo-Nazi sympathiser Maxime Brunerie attempted to assassinate former President Jacques Chirac on Bastille Day. From the Bastille Day celebrations, Mr Macron plans to mark the anniversary of the Islamic extremist lorry attack that killed 86 people in Nice. This year the Champs-Elysées has seen two attacks on police officers. Last month a man rammed a vehicle containing guns and gas canisters into a police van. In April a gunman shot dead police officer Xavier Jugelé using a Kalashnikov assault rifle.