Strategy, skill and expertise are behind the Metropolitan Police Service (MPS) becoming the first emergency service to reach a million Twitter followers. 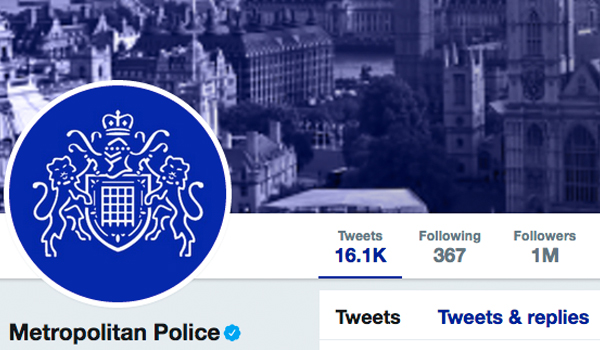 Strategy, skill and expertise are behind the Metropolitan Police Service (MPS) becoming the first emergency service to reach a million Twitter followers. The @metpoliceuk account passed the milestone this week just over seven years since it was set up. The page is the most followed emergency service Twitter account in the UK  and the force has more than 2.2 million followers in total across its 700 accounts. The MPS believes its success is due to the hard work of its media team and its constantly changing content. Most of its feeds are owned and operated directly by serving officers. Everyone involved in all our social media channels should be proud of what we have achieved, said Ed Stearns, MPS Head of Media. We are reaching millions of people with relevant and compelling information and importantly it is a crime fighting tool reaching millions of people with our appeals and ultimately often holding the key to solving crimes. He added: The corporate channel has got its one million follows because the Directorate of Media and Communication has put strategy, skill and expertise in to providing the information its audience needs through social media channels. This is a milestone but it still feels like only the beginning in the way we use new ways of reaching Londoners and visitors to the city. The MPSs total is far higher than the London fire and ambulance services, which have 169,000 and 92,400 followers respectively. Greater Manchester Police has the second most followers among Home Office police forces with 540,000, followed by West Midlands Police at 392,000. Police Scotland has 162,000 and the Police Service of Northern Ireland 92,400. The least-followed force account belongs to Dyfed-Powys Police  which has just 37,300.