A joint operation between the Metropolitan Police Service (MPS) and Spanish law enforcement has taken down an international criminal gang that smuggled Iranians into the UK on commercial flights. 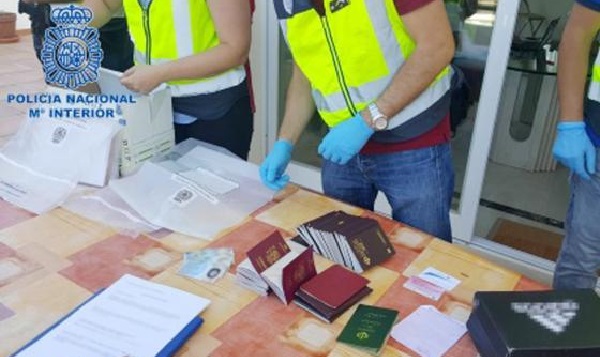 A joint operation between the Metropolitan Police Service (MPS) and Spanish law enforcement has taken down an international criminal gang that smuggled Iranians into the UK on commercial flights. Europol said the smuggling ring was perfectly structured, and each member had a defined role. A total of 101 individuals were arrested, including 14 members of the criminal group in Malaga, 44 Iranian nationals who were intercepted at different European airports carrying forged passports, and a further 42 individuals accused of selling their Spanish documents to the smuggling ring for prices ranging from 500 and 3,000 euros. The leader of the group was arrested by the MPS at Heathrow airport after a European Arrest Warrant was issued by Spanish authorities. He intended to fly to Brazil to avoid prosecution. During searches in Spain, seven Iranians were identified, including a five-year-old. Officers also seized 30 Iranian passports, 10 Spanish passports, computers, printers, more than 400 blank ID cards, firearms, 1,300 euros in cash and a high-end vehicle. The investigation into the smuggling ring began a year ago, after seven Iranian nationals were caught trying to catch a flight from Hamburg, Germany to the UK carrying both forged and authentic passports. Further investigations revealed the flight tickets had been purchased through a travel agency based in Malaga, which then led to the discovery of the criminal group. The network operated in Malaga, hosting the Iranian nationals in safe houses and using Spain as a transit country. They charged each migrant around 25,000 euros for supplying false Spanish passports, travel documents and accommodation in their final destinations.