Two Ministry of Defence (MoD) Police officers who rescued a group of people from a freezing loch – and then located another boat in a separate incident the same night – have won a Defence Police Federation Award. 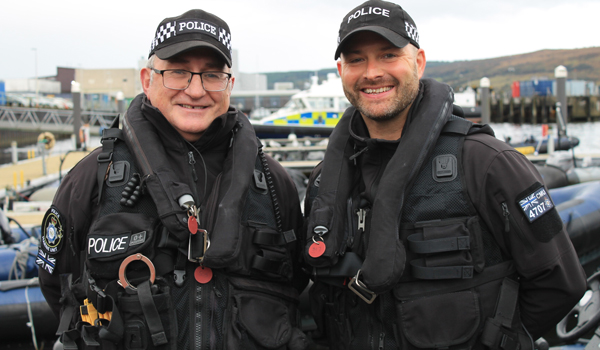 Police Constables  Iain McInnes and Jamie Byrne, of Clyde Marine Unit, had just started their night relief on September 6, 2020, when they received a message from Belfast Coastguard saying that four people were in the water of Loch Long, having fallen from a dinghy.

PC McInnes said: “We found four people in the water near a cove on Loch Long. They had been using a dinghy to get refreshments to bring back to their yacht, but when they were transferring from the dinghy, it capsized.

“We quickly assessed that the woman who was in the most trouble was the weakest swimmer. She was struggling and clinging on to a ladder at the side of the yacht, but the ladder had come away from the boat so she was going under the water.”

The officers – who were both recognised in the ‘excellence category’ of the awards –had to cut the woman’s lifejacket away before she could come on board their boat, as she had not fixed the crotch straps and it was going over her head, almost drowning her.

PC McInnes continued: “She was very cold and starting to develop hypothermia. We got there just in time. Even another 30 seconds and I think she would have gone under the water completely. When we got her settled we were able to get the other woman onto the boat as well.”

A lifeboat arrived on the scene and assisted with the rescue of the other two casualties. Two lifeboat crew, including a doctor, came aboard the police boat to help with first aid.

Then a search and rescue helicopter that had been training in the area also attended a call for help, and the officers requested an air lift for the woman who was hypothermic.

MoD Police said this was “a complex manoeuvre for the young-in-service PC Byrne”, requiring him to line up the boat with the helicopter while it was on the move.

He said: “The woman needed to be evacuated sooner rather than later – time was of the essence. And there was a lot of pressure because the pilot said ‘we need to make this work on this run; if we don’t I’ll have to go back to the airport to refuel’.

The casualties were taken to hospital and all made full recoveries.

Meanwhile PC McInnes and PC Byrne returned to the station to complete their reports. Later that night, a potentially serious safety and security breach was reported and at 1am the pair were out on patrol in Loch Long when they heard voices. They immediately responded and discovered an aluminium boat with an outboard engine and two men on board.

It turned out the men were foreign nationals who’d been fishing the previous day and their boat had become stranded. They had to wait for the tide to change, by which point it was dark and they were unfamiliar with the local area. They’d got lost and had no navigational equipment or lights, so the officers checked the men’s identity then returned them to their original point of entry into the river.

On winning the Defence Police Federation Award, PC McInnes said: “I am very pleased to win this Award, but I’ve had 32 years in the job so I’m more pleased for Jamie to receive this at the start of his career.”

PC Byrne said: “I was quite shocked and surprised to get the award, but it’s lovely to be recognised. I was very lucky that I’d worked with Iain for ten months as a crew during Covid. It was great to learn from him, he taught me a lot.”

Defence Police Federation chair Eamon Keating said: “Iain and Jamie displayed composure, courage and exemplary boat skills when helping the people who’d fallen into the loch. Jamie had only recently qualified as a RHIB coxswain. His skill, along with Iain’s experience, prevented this rescue from being a recovery.

“Their subsequent rescue of the fishermen showed quick-thinking; who knows what difficulty those men could have got into. This was yet another successful night of Marine Unit Policing by DPF members.”

Brendan O’Hara, MP for Argyll and Bute, said: “Iain and Jamie prevented a likely tragedy… I’m delighted that their work and commitment has been recognised by the Defence Police Federation. They are outstanding examples of the crucial role the Ministry of Defence Police plays in our community.”