A long-serving senior officer whose father was one of the first Muslims to join the police service 50 years ago is to receive a formal written warning after admitting gross misconduct. 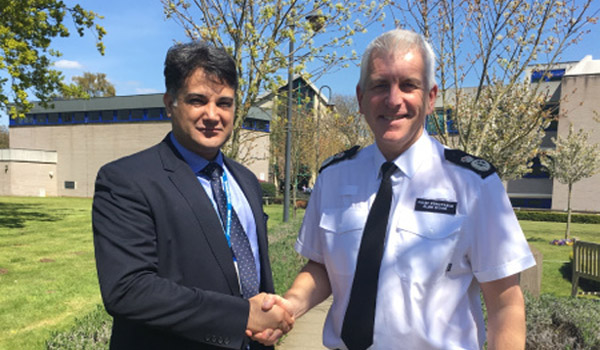 A long-serving senior officer whose father was one of the first Muslims to join the police service 50 years ago is to receive a formal written warning after admitting gross misconduct. Assistant Chief Constable Naveed Malik was told his dismissal for helping a colleague who was seeking promotion would have been a loss to Cambridgeshire Constabulary. Announcing the decision, misconduct panel chair Dorian Lovell-Pank paid tribute to Mr Malik  who accepted being at fault from the outset  for the esteem in which he was held within the police service, by the wider public and particularly in the Muslim and BME community. Mr Malik supplied another officer with the topics coming up at a promotion interview  and accepted the allegations at the start of the disciplinary process on Monday (September 25). The hearing at Wyboston Lakes Conference Centre, Bedfordshire, was told that the allegations involved a tri-force promotion process to appoint a new chief inspector covering the Bedfordshire, Cambridgeshire and Hertfordshire forces in February 2017. The process comprised two stages: a presentation by the candidates to a panel and an interview conducted by a second panel. Mr Malik, one of the most senior serving black and minority ethnic officers in the country and whose father was a pioneering officer for the Muslim communities when he joined the service in 1967, was to chair the second stage of the interviews. Ahead of this process Mr Malik had provided informal mentoring to the officer referred to as Inspector A. The hearing was told Mr Malik met with his interview panel members on the first day of the three-day process and agreed to change the wording of one question. He instructed police staff member B to call Inspector A on a mobile phone and tell the inspector the four areas to concentrate on for the interview for the promotion process. Police staff member B called Inspector A and began to list the topics for the interview process, saying Nav has just asked me to give you the topics. Inspector A stopped police staff member B, saying it did not seem right and that he/she wanted to be promoted on merit. The unnamed inspector reported Mr Malik to the chief constable.. On Tuesday (September 26), Mr Lovell-Pank gave the written warning recommendation at the end of a two-day hearing on behalf of the three-person. It will be sent in writing to Deputy Chief Constable Alan Baldwin who could make a formal decision about ACC Maliks future within a week. Mr Lovell-Pank told Mr Malik: It is a harsh fact of life as we all know that the higher you climb the harder you fall. In your 27 years of service, you have not only proudly succeeded your father in the police but you yourself have risen to high and well-deserved seniority. You are one of the highest-ranking police officers in this country and we are all aware of the esteem with which you are held in the police service and the wider public, particularly in the Muslim and BME community. But we feel that we have not had a full explanation of why you interfered with the promotion process as you did. We have been told that what you did was an error of judgement as to the limits of the mentoring process. And yet, everyone else involved immediately recognised that what you did could give rise to an unfair advantage. This for us as a panel is the most troubling aspect of your actions. Having said that, its important to note that at all times you have fully co-operated with the investigation. From the outset you have accepted that you were at fault. We have been told that the appropriate authority has considered very carefully your position and does not consider it necessary that you be dismissed. We are told and accept your dismissal would be a loss to the force and to policing generally. The public is entitled to have a police force it can trust and rightly expects that those officers who fall short be brought to book and dealt with in an appropriate fashion.