Plans to attack police stations were among a dozen terror plots thwarted by authorities in France since the start of the year, it has emerged. 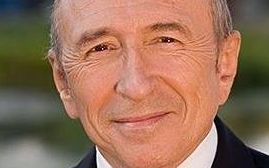 Plans to attack police stations were among a dozen terror plots thwarted by authorities in France since the start of the year, it has emerged. Interior Minister Gerard Collomb spelt out the attempts by the so-called Islamic State (Daesh) to “divide the national community and create clashes between French people”. Gay nightclubs in Paris were also on the intended hit list, he said. “This plan of violent action targeted Parisian nightclubs and in particular gay clubs,” he told a parliamentary committee examining government proposals for new anti-terror laws. He gave no specific details of the plots, but said it was among a host of others that French security forces had managed to prevent over the past eight months. “The threat remains high,” Mr Collomb said on Thursday (September 14). “What Daesh wants is to divide the national community and create clashes between French people. This is the trap into which we must not fall,” he said. Among the other previously unpublicised thwarted attacks was a planned assault, foiled in May, on an air force training school in the southern town of Salon-de-Provence, the minister said, without giving details. Another plot targeting “a police station, a barracks or a supermarket with hostage-taking”, was averted in January. “We see that we are moving from an outside threat to an internal threat, and we have to be able to adapt to the evolution of this threat,” he told the committee. In the most recent foiled plot, homemade explosives ready for use were found in an unoccupied flat near Paris last week. The parliamentary committee is examining the controversial anti-terror law proposals which are designed to replace, on November 1, the state of emergency which France has been under since jihadists struck in Paris in November 2015, killing 130 people. The new laws  a campaign pledge of President Emmanuel Macron  will give police and security authorities the power to place people under house arrest, order house searches and ban public gatherings without the prior approval of a judge.