A man who imported a child doll from Hong Kong and possessed hundreds of indecent images of children has been sentenced. 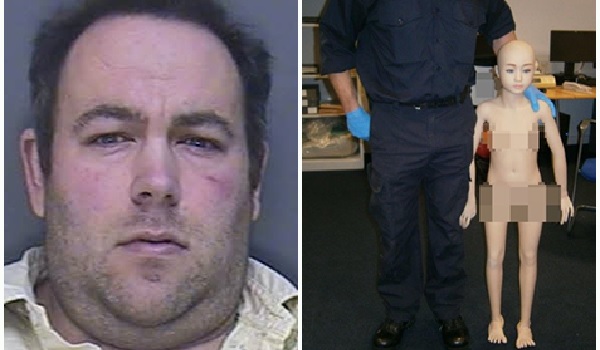 A man who imported a child doll from Hong Kong and possessed hundreds of indecent images of children has been sentenced. Brian Hopkins, 40, ordered the doll online but Border Force officers at Stansted Airport intercepted the package and seized it last October before it was delivered. The anatomically correct doll was addressed to Hopkins home in Mannamead, Plymouth. The National Crime Agency (NCA) says the importation of child sex dolls is a reg flag of sexual interest in minors. NCA officers searched Hopkinss house in November last year, and found almost 800 indecent images on his mobile phone. He had 247 category A images and videos, 341 category B and 196 in category C. In his interview, Hopkins admitted knowing he should not have had the images but said he found it exciting to possess them. Although he admitted to buying the doll to have sex with it, he claimed he did not know importing it was illegal. On Friday (September 1) he was sentenced at Plymouth Crown Court to ten months suspended for two years after admitting importing an indecent or obscene article, four counts of possessing indecent images of children, and three counts of possessing extreme pornography. He was also handed a ten-year sexual harm prevention order and put on the sex offenders register for ten years. NCA senior investigating officer Hazel Stewart, said: The importation of child sex dolls is a relatively new phenomenon but time and again importers are also guilty of associated offending against children as with Hopkins. They are a real flag of a sexual interest in children. We are working hard with our partners in Border Force to stop them entering the country and then investigating and prosecuting the importers. Border Force senior manager Julian Doughty added: My frontline officers work tirelessly to secure the UKs borders, and this case is one of several where their vigilance has successfully led to the uncovering of offenders with a criminal interest in children. Border Force continues to work closely with other law enforcement agencies to bring those responsible for importing these obscene items to justice. In June, Andrew Dobson, 49, became to first man in the UK to be sentenced to prison after importing an obscene child-like doll from Hong Kong labelled as a mannequin. He admitted to buying the doll to use for his own sexual gratification, and to downloading child abuse images and movies online. Dobson was sentenced to two years and eight months in prison and placed on the sex offenders register for life. Following the conviction, Detective Constable Andy Kent of Cheshire Constabularys Paedophile and Cyber Investigation Team called for greater understanding of the links between buying a child-like sex doll and further sexual offending. He said some officers who seize obscene dolls are failing to check offenders computers or close cases without speaking to them.