A low-level cannabis dealer who helped himself to a haul of class A drugs that had washed up on a beach has been handed a two-year suspended sentence. 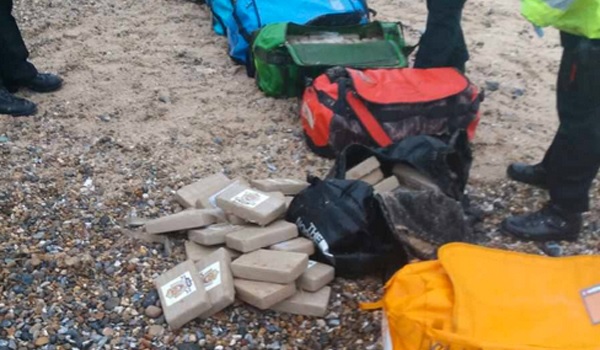 A low-level cannabis dealer who helped himself to a haul of class A drugs that had washed up on a beach has been handed a two-year suspended sentence. James Underhill, 34, from Caister-on-Sea in Norfolk texted a friend to say he had found Willy Wonkas golden ticket when he came across the bags, containing 360 kilograms of cocaine in February. Worth £50 million, it was one of the largest hauls of drugs to have washed up on the UK coast. Norwich Crown court heard Underhill took around a kilogram of the cocaine  worth between £20,000 and £30,000  before it was confiscated from his home by Norfolk Constabulary in February. Officers also recovered £5,000 of cannabis from a safe. He took a small amount of the cocaine himself and dealt some to others over a three-week period. Prosecutor Martin Ivory said Underhill claimed to have found two packages, each weighing one kilogram, which had already been broken into prior to his discovery of the haul. The defendant, in his text messages to another individual, effectively said he had stumbled upon what he described as Willy Wonka`s golden ticket and speculated he could be £20,000 to £30,000 better-off, based on what he found on the beach,” he added. Although we cannot say what purity the cocaine was at the point it was seized by police during the course of the search what we do know is that the other packages that were picked up in other searches and were recovered from the beach contained cocaine of 94 per cent purity, so very high indeed. Mitigating, Andrew Oliver said: Prior to that all of the dealings he has been doing are in relation to cannabis and it`s perfectly obvious from those messages that he is a low-level cannabis dealer. In my submission he`s a somewhat pathetic heavy user of both cannabis and crack cocaine. Underhill was sentenced to two years in prison suspended for two years, and was ordered to take part in a drug rehabilitation programme.