A man has been jailed for a vicious attack that left a police officer unconscious and believing he was going to die. 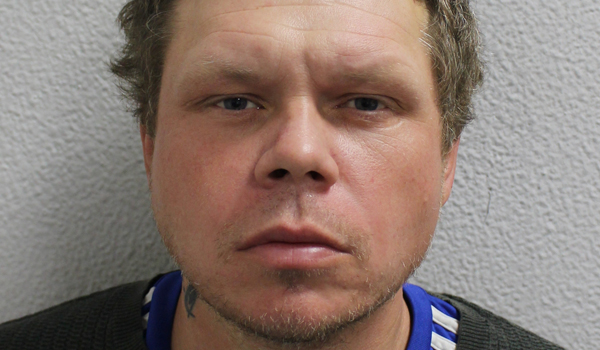 The Metropolitan Police Service (MPS) officer was so traumatised by his injuries that he even activated his body-worn video camera to record a message to his wife and baby to say goodbye.

Thirty-year-old Alan Keeble was jailed for seven years when he appeared at Croydon Crown Court on Monday (September 13) having previously pleaded guilty to causing grievous bodily harm with intent. He was placed on extended licence for a further three years after the judge deemed it necessary to protect the public.

Keeble was also sentenced to three months, to run concurrently, for assaulting an emergency worker in relation to a second officer.

MPS officers had been called to a domestic incident at Keeble’s address in Oakbrook Close, Bromley, on February 10, and he was arrested for making threats to kill.

Following his arrest, Keeble became aggressive, clenched his right fist and punched one officer in the face causing him to fall backwards on to a table.

“He continued to punch the officer in the face, back and head, while other officers at the scene tried to pull him away,” said the MPS.

“In the struggle, Keeble also punched a second officer in the head, causing bruising.”

The badly injured officer, who lost consciousness during the attack, was taken out of the property with a swollen face and bleeding nose. He was given first aid by the London Ambulance Service at the scene.

He was taken to the Princess Royal University Hospital for treatment. A CT scan showed multiple fractures to his face, including his eye and cheek, which required the insertion of four plates.

“Police officers never know what they will face when they attend an incident during their shift,” said Det Sgt Power.

“These officers have shown incredible bravery serving on the front line. The impact of always running into danger and helping the public cannot be underestimated.

“In this case, Keeble lashed out and viciously attacked the officers for just doing their job. The quick actions of colleagues stopped the situation from becoming much worse.

“What this officer has had to go through is abhorrent. He has been left with a permanent reminder of the attack with metal plates in his face.

“This sentencing shows that we do not tolerate any abuse of our officers and offenders will be dealt with. Violence has consequences and I am glad Keeble has rightfully been held to account for his actions.”