Officers had a “miracle” escape from death or serious injury after a drunken driver ploughed into a police roadblock, a court heard. 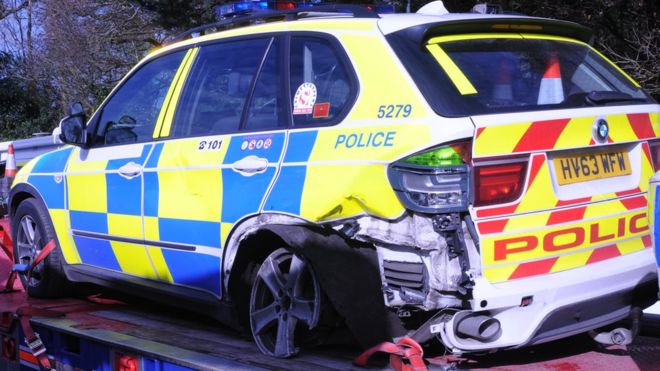 Officers had a “miracle” escape from death or serious injury after a drunken driver ploughed into a police roadblock, a court heard. Three officers suffered whiplash injuries and two vehicles were written off in the crash following a 23-mile high speed pursuit at speeds of up to 130 miles an hour along the M27 and A31, through the New Forest, in April. Martin Ralfs, 58, from Southampton, who had previously admitted dangerous driving, drinking and driving, failing to stop and breaches of a restraining order, was jailed for two years. In sentencing Ralfs at Southampton Crown Court, Judge Peter Ralls QC said it was a “miracle” his “appalling driving” had not resulted in tragic consequences. Ralfs was seen speeding and swerving across lanes along the M27 in the early hours of April 2 in his Honda Accord at an estimated 90mph. When officers tried to stop him, Ralfs tried to overtake, ramming the police vehicle and driving off at around 100mph, rising to 129mph. Knowing that the car was heading back towards the M27, three police cars from Hampshire Constabulary`s Roads Policing Unit (RPU) carried out a tactical containment in a bid to stop Ralfs safely. However, he refused to slow down and crashed into the back of two of the police cars. One spun and crashed into the central reservation and the other one into the carriageway, both losing a rear wheel and suffering extensive damage. The Honda came to a stop on the hard shoulder and Ralfs, who suffered minor injuries, was arrested. He told officers at the scene: “I just want to die. I don`t want to be here any more.” Andrea Becker, defending, said Ralfs had “ruined his life” over a failed relationship with a former partner. The court heard how he later failed a roadside breath test and further tests revealed he was over the drink-drive limit. Sergeant Mark Furse, from the force`s RPU, added: “It was sheer luck that no one was seriously injured or killed as a result of Mr Ralfs reckless driving.”