Man held over crossbow bolt fired into The Oval

A man has been arrested after a crossbow bolt was fired on to the pitch at one of the world`s most famous Test cricket grounds. 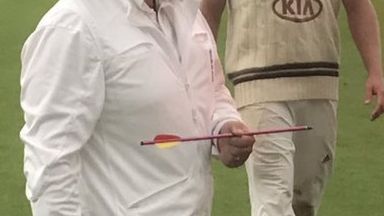 A man has been arrested after a crossbow bolt was fired on to the pitch at one of the world`s most famous Test cricket grounds. Play was abandoned and fans were evacuated on the final day of the Specsavers County Championship Division One match between Surrey and Middlesex after an arrow landed on the pitch at The Oval. The Metropolitan Police Service (MPS) said it detained a 35-year-old man on suspicion of attempted grievous bodily harm in relation to the incident. He has been released on bail to a date in late September. Officers, who are investigating whether the crossbow bolt was fired into the south London venue from a nearby roof terrace, are continuing to appeal for any witnesses to come forward, including video footage. Lambeth Detective Constable Dominic Landragin said: “There were significant crowds watching the match and it is likely that a number of those present will have footage of the incident that could assist in our investigation. “Although nobody was injured, this was a reckless action taken with no regard for the safety and well-being of the spectators or the players. It is important that we trace those responsible and I urge anyone who has footage of the incident to get in touch as soon as possible.” Play was halted in the game at around 4.20pm on Thursday (August 31). Players and umpires were seen running from the field before fans were told to move inside. The MPS said that 1,068 spectators were evacuated and there were no reports of any injuries. Umpire Paul Baldwin was pictured holding the pink-coloured bolt, with red and yellow fletching.