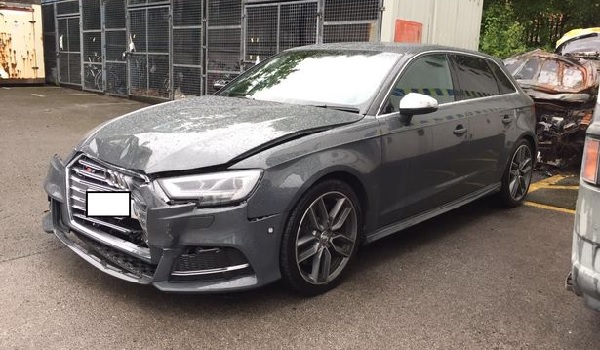 A man faces charges of attempted grievous bodily harm after ramming police cars on two separate occasions and leaving two officers hospitalised. Daniel Cowell, 24, from Salford, has been charged with two counts of attempted section 18 assault, two counts of dangerous driving, two counts of aggravated vehicle taking, failing to stop for officers and possession of a class B drug. Cowell was arrested following a pursuit on Wednesday (October 18) during which several patrol cars were rammed. He was wanted for a similar incident on last month, which left two officers needing hospital treatment. The Greater Manchester Police officers were patrolling Salford in an unmarked vehicle on September 5 when they spotted a white Ford Transit van with false number plates. The driver failed to stop, and the officers began to pursue his vehicle. Dash cam footage shows the suspect driving at high speeds and repeatedly slamming on the brakes. He then led the patrol car onto Duchy Street in Irwell before turning around and ramming into the vehicle. The van sped away from the scene and the vehicle was recovered a while later. Around £10,000 of damage was caused to the patrol car, and the officers were taken to hospital with minor injuries. Sergeant Danny Kabal, from GMPs tactical vehicle unit, said: Officers put themselves at risk on a daily basis, facing extremely dangerous situations, to help protect the public and keep the streets of Greater Manchester safe for everyone. The emotional and physical damage caused by attacks, no matter who you are, is something we will never tolerate and we will always do everything in our power to bring those responsible to justice.