Nearly 400 outdated IT systems used by police in Staffordshire are being replaced with around 100 state-of-the-art systems as part of the £110 million contract with defence firm Boeing to upgrade the forces technology. 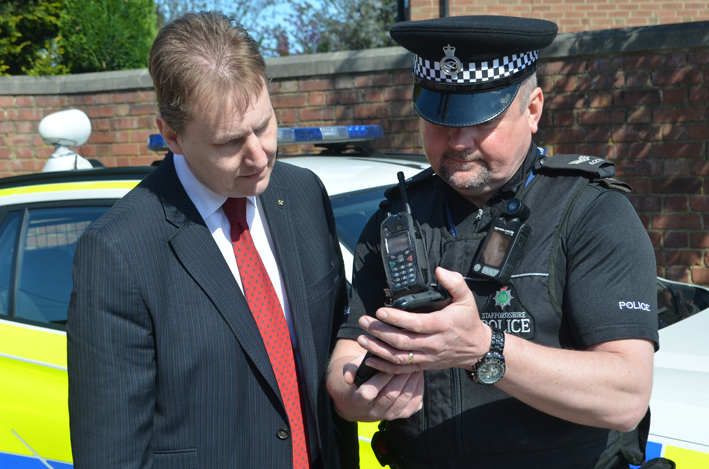 Nearly 400 outdated IT systems used by police in Staffordshire are being replaced with around 100 state-of-the-art systems as part of the £110 million contract with defence firm Boeing to upgrade the forces technology.

Staffordshire police and crime commissioner (PCC) Matthew Ellis said that some IT systems used by Staffordshire Police were bought in the 1990s with many unsupported by the original providers, meaning the cost of keeping them going is massive and the risk of them failing is significant.

Staffordshire Police Chief Constable Jane Sawyers said officers had been hampered by outdated technology and a lack of real-time information to help them do their job, but the IT partnership with Boeing takes them to the next level and will see officers and staff equipped with state-of-the-art technology.

Mr Ellis announced in February that Boeing was to become the strategic IT partner for policing across Staffordshire and Stoke-on-Trent as part of his ongoing investment in a Tech Revolution.

He said that since then, more information was now emerging on the scale of changes planned.

Boeings involvement will dramatically improve the capability of policing in Staffordshire while saving money on maintaining outdated, unsupported technology systems, he added. It will bring greater opportunities to work more effectively with partner organisations and local communities  as well as greater capability in fighting crime.

Back in 2013, like most members of the public, I assumed that police across the country were using cutting-edge technology  the best money could buy, but thats too often not the case, said Mr Ellis.

In Staffordshire, the plans I set out in 2013 to invest in technology were both to ensure day-to-day essential systems function, but also to radically advance the capability of police to meet changing crime and changing threats.

Last years roll-out of mobile technology to all officers means they have more flexibility in accessing police systems and getting information on the move rather than constantly heading back to base.

Thats showing encouraging signs of a rise in visible policing, while the new SPIRIT technology  Northgates demand and resource management system  which is nearly completed, means that for the first time ever control room staff can see on screen and in real-time where policing assets are across Stoke-on-Trent and Staffordshire.

Mr Ellis said that while the work over the past two years is a major step forward, it is core systems around intelligence, management of information and connectivity with other law enforcement or security agencies that is essential.

Getting finances on track, setting out clear ambitions for what technology can do for policing in Staffordshire and building the right foundations in advance means we have been able to secure a world-class technology partner in Boeing, he added.

We live in a fast-changing world where crime investigation and prevention almost always has elements of technology involved with it and where criminals and victims can live continents apart rather than a few miles away.

Even in the first few weeks with Boeing in place it has become evident that the scale of what is possible is significantly greater than weve anticipated for the short-term.

As part of the PCCs Tech Revolution, special constables will now be equipped with mobile technology.

All frontline police officers and police community support officers across Staffordshire have already been issued with new smartphone and tablet devices that Mr Ellis says will give them the information and tools they need at their fingertips.

Now, 100 Specials are to receive the new technology by the end of the summer. The allocation of mobile devices will be based on operational need and go to Specials who are identified in each local policing team area.

Special constables make a massive contribution to society and provide a crucial additional link between the police and local communities, said Mr Ellis.

I want to make

A better way to manage your digital evidence