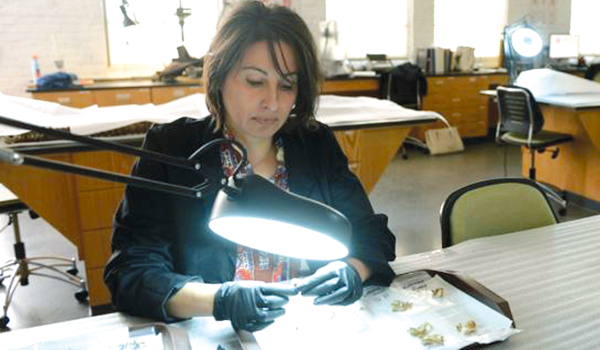 On a Sunday afternoon earlier this month, officers from South Yorkshire Police cordoned off an area of land near a street in the Swaithe area of Barnsley following the discovery of unidentified buried human bones. Such finds are not common but, especially in cases where a crime is suspected, they present police and forensic investigators with a formidable challenge when it comes to ascertaining the age of the deceased. Typically, assessing the age of skeletal remains relies on examination of the wear and tear on the surfaces of the joints. However, the findings can vary widely depending on the lifestyle of the deceased and how the examiner interprets particular features. Depending on the methodology used, different examiners could determine that an individual in his or her forties was anywhere between 27 and 70 years old. Now forensic researchers at North Carolina (NC) State University have found a more accurate way to assess age at death, based on the mineral density of major bones. The bone mineral density of a human skeleton can provide forensic practitioners with a wide range of information about the deceased, from the presence of specific medical conditions to whether they were malnourished. This information can help identify unclaimed remains or determine whether a deceased child was the victim of neglect. While using bone mineral density (BMD) to assess age is not new, the NC State team has found a way to fine-tune the practice. Specifically, the researchers found that assessing BMD at the neck of the femur provided the best sampling data for determining age. Bone mineral content and density increase as we grow, then decline at a fairly steady rate once we reach adulthood, making it a potentially useful way of assessing age, said Ann Ross, a professor of biological sciences at NC State University and the author of a recently published paper on the subject. In a study of the remains of 33 men and eight women, the researchers found that BMD could determine age within a 13-year margin of error. This, in itself, is a step in the right direction, said Professor Ross. But we think the method could be made even more accurate if we were able to significantly increase the sample size, including more women and more representatives from each age group. The researchers found no significant difference between men and women based on the BMD of the femur. However, they did find difference between sexes in the density of the skull. They believe the skull is better for assessing sex because it is not a load-bearing bone, meaning it is subject to fewer outside forces, allowing forensic practitioners to detect BMD differences that result from a persons biological sex. While promising, we didnt have a large enough sample size to draw firm conclusions about using BMD to determine sex  that would require a larger study, said Professor Ross. The technique has its limitations. Bones that have been buried for long periods leach minerals and this can affect results. Also, remains that have been exposed to the elements could be infused with a range of different minerals,—- which can affect the accuracy of BMD analysis. Despite this, Professor Ross believes that in the right cases, the technique could be a breakthrough and provide police officers with sufficient information to confirm the identity of a missing person or victim of crime. The team now hopes to expand its research by studying more samples to make further refinements. To encourage others to make use of the technique, the team at NC State has produced a video guide. The use of BMD in a forensic context is relatively new, and it is important for practitioners to understand how to use it properly, said Professor Ross. A video journal allows us to visually demonstrate the process. The video explains the circumstances under which BMD may prove useful, how to properly scan remains and how to interpret the data to ensure the results are scientifically robust. This is particularly important as there are many variables th