An antique firearms dealer who sold handguns and home-made bullets linked to more than 100 crimes  including three murders  has been convicted of supplying illegal weapons to criminal gangs. 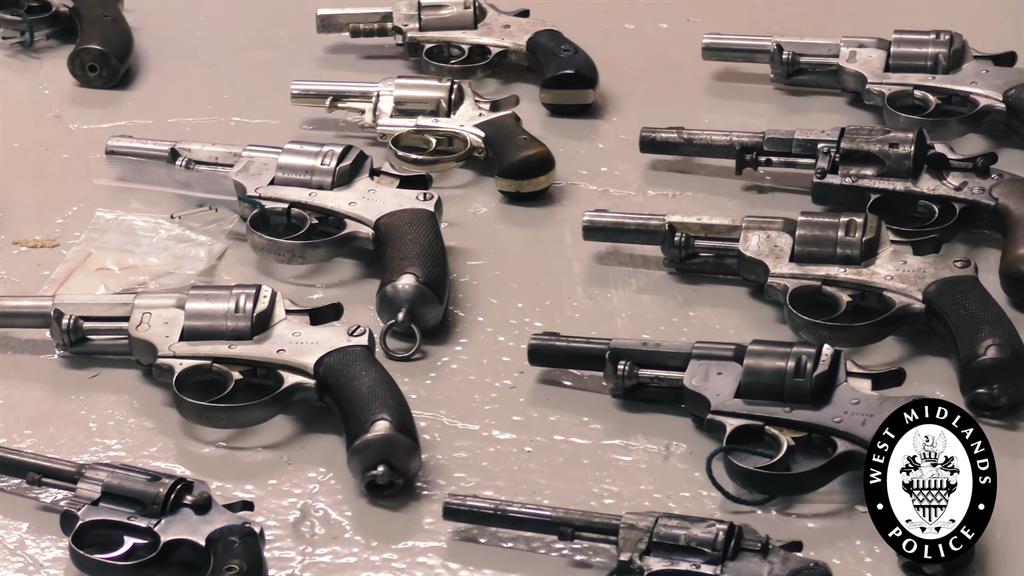 An antique firearms dealer who sold handguns and home-made bullets linked to more than 100 crimes  including three murders  has been convicted of supplying illegal weapons to criminal gangs. Detectives said the seizure of 100,000 rounds of ammunition and guns imported or brought back into service by Paul Edmunds was a major victory on gun crime, which had undoubtedly saved lives, but they believe more than 200 of his guns could still be on the streets. In all, 17 criminally-linked weapons recovered by officers are known to have been imported by Edmunds, while around 1,000 bullets connected to him have been recovered from crime scenes in the Derbyshire, Leicestershire, London, Greater Manchester, Nottinghamshire, South Yorkshire, Warwickshire, West Midlands and West Yorkshire. Edmunds, 66, imported a Colt pistol used in a fatal shooting at a London nightclub and supplied ammunition used in two other killings and an attempt to shoot down a police helicopter. A jury at Birmingham Crown Court heard Edmunds, of Hardwicke, Gloucestershire, was arrested at his home in 2015, where he had three armouries and made bullets to fit antique weapons. The registered gun dealer, who said in an interview he was not responsible for the actions of those who bought his bullets, and his duty of care only extended to not selling to people who didnt look right, was found guilty of conspiracy to supply firearms and ammunition and smuggling banned Colt handguns into the UK from the US. Jurors also convicted the pensioner of possessing a prohibited air pistol and perverting the course of justice by filing down a bullet-making tool to destroy potential evidence. A two-month re-trial was told Edmunds and Dr Mohinder Surdhar  likened by police to the lead characters in the TV series Breaking Bad  acted together to supply antique revolvers and custom-made ammunition to criminal gangs. Surdhar, 56, from Handsworth, Birmingham, admitted conspiracy to supply firearms and ammunition between 2009 and 2015 before Edmunds trial. Edmunds had denied hand-crafting bullets for use in supposedly obsolete vintage weapons, including 19th century revolvers, which he brought into the country legally. As well as importing antique weapons, he also imported hundreds more modern prohibited firearms from the US, having falsified customs paperwork. Prosecutor Andrew Fisher QC alleged tell-tale marks on ammunition found at crime scenes linked the rounds to tools used by Edmunds. Edmunds, a former photographer, denied any wrong-doing by importing antique firearms into the UK legally, claiming he had never made and supplied live cartridges for the weapons. But the court heard how Edmunds supplied guns and live bullets to criminals through Dr Surdhar, whom he met at a gun fair. The jury was told Edmunds bullets were recovered following the Birmingham murders of Derek Myers in 2015 and 18-year-old Kenichi Phillips in 2016. Detectives discovered that one weapon  imported on November 14, 2013  was used five weeks later in a Boxing Day fatal shooting at the Avalon nightclub in London. Four of Edmunds bullets were recovered from the victims body. Following his arrest, 100,000 live rounds were seized from the armoury inside his garage, while seven wheelie bin-loads of gun and bullet components were recovered from a bedroom and attic. The crime scenes included around 50 gang-related shootings and premises raided by officers between 2010 and 2016. But the trial heard that officers believe many other guns seized across the country were sold by Edmunds, who failed to keep accurate records in his firearms register He was finally arrested after the National Ballistics Intelligence Service carried out an analysis, uncovering the growing trend of pre-war pistols used in a rash of shootings. After the trial, Detective Constable Phil Rodgers said the pair were like the Breaking Bad of the gun world  on the face of it, both decent men, but using their skills and expertise to provide deadly firearms.