The growth of international crime, trafficking and cyber attacks have reinforced the need for learning to be shared around the world. Police Professional reports from the unique training event involving senior officers from across Europe who have attended the FBIs Academy in Quantico. 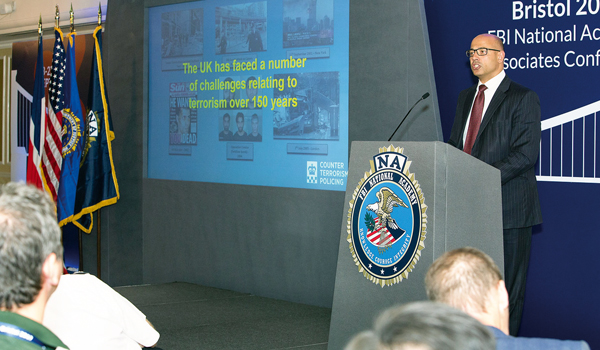 The FBI National Academy is a ten-week, professional course of study for law enforcement managers that takes place at the FBIs training headquarters in Quantico, Virginia. Although the majority of the 220 students that make up each session are from the US, the Academy is also open to international law enforcement professionals from around the world. Participation is by invitation only, through a nomination process, and around 30 overseas students take part each year, including two or three from the UK. Participants engage in a wide range of leadership and specialised training and have the opportunity to share ideas, techniques and experiences, creating lifelong partnerships that transcend both national and international borders. Classes cover a range of subjects, including law, behavioural science, forensic science, understanding terrorism/terrorist mindsets, leadership and communication, and there is a strong emphasis on health and fitness. The final physical challenge is a gruelling 6.1-mile run through a hilly, wooded trail known as the Yellow Brick Road. The course includes obstacles such as walls to scale, creeks to cross, windows to jump from, rock faces to climb and barbed wire to crawl under. Those who pass the test are awarded a yellow brick as a memento. On graduation, officers can join the FBI National Academy Associates (FBINAA), an organisation of more than 16,000 law enforcement professionals who actively work to continue developing higher levels of competency, cooperation and integrity across the law enforcement community. Each year one of the FBINAAs International Chapters hosts a retraining event where members participate in further professional development and renew professional networks. The 35th re-training event of the European Chapter took place in Bristol at the end of September and attracted more than 300 attendees from 40 countries in Europe, the majority serving in senior positions within police departments, justice ministries, security services, border agencies and other relevant law enforcement organisations including the FBI. A welcome reception was held on the SS Great Britain, which included a display of precision parachuting by members of the Red Devils, and provided an opportunity to catch up with old friends before the serious work of the first day began. In keeping with the international theme of the event, the opening ceremony involved the playing of both the British and American national anthems, followed by a Mace Escort for the Mayor of Bristol and other dignitaries. Chapter president and chief constable of Staffordshire Police, Gareth Morgan, completed his own course at Quantico in 2000 during the 200th session of the Academy and still considers it to be one of the highlights of his career. Mr Morgan chose the theme International Policing: Better Together to reflect the changing nature of the threat from terrorism and organised crime, as well as the changing political landscape across both Europe and the US. We need to plan, prepare and protect the public we serve, and to be at our best we are better together, he said. The first of the three high-profile speakers to deliver presentations on the first day was Lynne Owens, Director General of the National Crime Agency (NCA). Noting that the media often attempts to explain the role of the agency by stating it is the British equivalent of the FBI, she said her ultimate aim was to raise the profile of the organisation to the point that people began asking FBI agents whether they worked for the US equivalent of the NCA. Ms Owens detailed the growth of online child sexual exploitation (CSE), the demands it is placing on the agency and the need for more proactive action from those providing online services. In 2010, we had around 400 referrals a month from industry about incidents of CSE online. Last month, we had 4,200 referrals, she said. Thats a 700 per cent increase. There is a role for the private sector to have a bigger and broader part in preventing these images fr