The Justice Minister has said legislation that will allow for body-worn cameras for gardai will address all concerns about civil liberties. 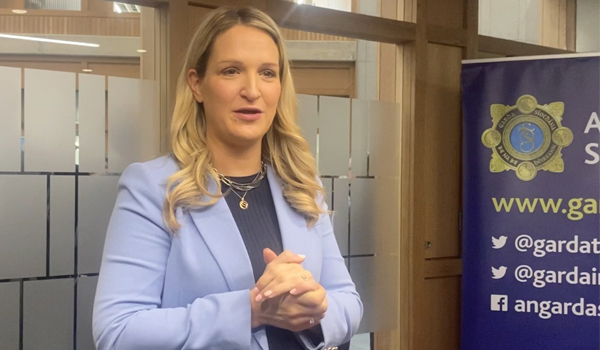 Helen McEntee said the legislation, which is expected to come before Cabinet in the next few weeks, will be within the parameters of the laws that protect privacy.

Concerns have been raised by the Irish Council for Civil Liberties over breach of privacy. It said the use of body-worn cameras by gardai cannot be justified.

There have been heightened calls for the introduction of legislation that will allow for body-worn cameras following a number of attacks on gardai.

Representatives for the Garda Representative Association said the legislation contained in the Recording Devices Bill should be speeded up.

Earlier this week, two gardai needed hospital treatment after they were attacked while attending an incident in Ballyfermot.

Ms McEntee said her department has worked with various different groups and organisations to ensure the legislation does not impede on anybody’s civil liberties.

The minister said she was “absolutely appalled” by the footage of the attack, which was widely circulated online.

“In terms of body-worn cameras, this is a priority for me. We have the Recording Devices Bill, which I had hoped to have at Cabinet by now, but as always is the case with legislation there have been some delays,” Ms McEntee added.

“That legislation will be brought to Cabinet in the coming weeks. The funding will be there to make sure that the body-worn cameras can be rolled out and this is really about keeping people safe.

“It’s about assisting the gardai and their work as well. So while it will help keep gardai safe in making sure that there’s very clear footage of what happens when there was an incident, but also, turning to domestic violence, it’s often the first few seconds on the scene that can be most important in gathering evidence or information.

“To have that type of equipment is really, really important. It’s still a priority. There’s no issue.”

An Garda Síochána Commissioner Drew Harris said any issues around civil liberties have been addressed by other European countries.

“Body-worn cameras are a proven technology in policing and do reduce the severity of attacks on police, and also they do provide very strong evidence of incidents that gardai will be dealing with,” Mr Harris said.

“They make it easier for complaints to be resolved, either proven or disproven.

“It is a significant addition to the equipment that we’d want to have.

“We have to wait for the legislation before we can commence our tender process because we are tendering into a market which is well developed, which a lot of the concerns being expressed in terms of civil liberties have already been addressed by other European nations.

“There are products there that we think would be very viable in terms of gardai using.”

Mr Harris said he has spoken to both garda members who were attacked who he said are in “good spirits” and are making a recovery.

“Both of them required hospital treatment and are now resting. They are looking forward to getting back to work despite the incident that happened,” he added.

“Like many of our members who face these types of attacks, they get a lot of support from their colleagues and from staff associations. We are very much concerned for their wellbeing that they make a speedy return to work.”

The comments came at the opening of the Walter Scott House garda facility in Military Road in Dublin.

Up to 900 Garda personnel will be based at the location, many of whom have been relocated from Harcourt Square.

Mr Harris described that the 86 million euro building as “state-of-the-art”, which the Office of Public Works said was delivered on time and on budget.

Ms McEntee said that as criminals become more advanced, gardai need to be able to evolve and do their job in modern facilities.