Scientists have made an important discovery which could lead to new ways to collect biometric information and evidence of substances deposited among fingerprints without destroying the evidence. 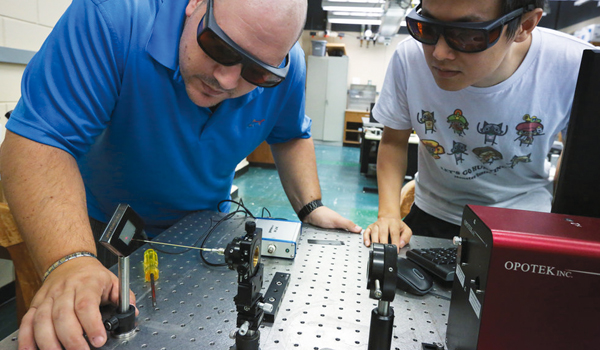 Fingerprint evidence has been an essential part of criminal investigations for almost 150 years and, more recently, advances in DNA technology have made it possible to create a profile of a suspect even when the fingerprint is incomplete. Residues of substances that person has been in contact with  such as drugs or explosives  can also be transferred to surfaces by touch, but recovering and identifying these has proved more difficult. While a photograph of a fingerprint can quickly identify a match on a database, the only way to analyse the chemical composition of the print is to use a swab, inevitably destroying the print in the process. A team of researchers at the Louisiana State University Department of Chemistry, led by Professor Kermit Murray, has developed an infrared laser ablation and vacuum capture system for fingerprint sampling that simplifies the process of identifying the chemical compositions of prints at a crime scene. The concept came from former undergraduate researcher Eden Camp, who had interned at the Louisiana State Police (LSP) Crime Lab during the summer of 2015. She approached Professor Murray and postdoctoral researcher Fabrizio Donnarumma with the idea of using their laser laboratorys equipment to detect substances from fingerprints. Ive always had a great interest in forensic science and I wanted my undergraduate research to reflect that, Ms Camp said. During her internship at the LSP Crime Lab, she started brainstorming ways that forensic experts could detect chemical substances from fingerprints: The most challenging part was trying to determine a method of collection that lost the least amount of sample and wouldnt destroy the surface it was on. Professor Murrays team, which also included graduate student Fan Cao, had extensive experience of using lasers to remove tiny layers from various tissues for bioanalysis. We realised that if our techniques work for biomolecules as fragile as DNA and RNA (Ribonucleic acid), it should work with almost anything, explained Mr Donnarumma. We can capture almost anything that is on a surface. In this case, it just happened to be fingermarks. The researchers used their lasers to take tiny samples of fingerprint materials from a surface, draw them into a filter and then analyse them. This technique can be used to capture and analyse a variety of molecules contained in fingerprints, including lipids, proteins and genetic material. Keen to develop the idea further, Professor Murray applied for, and received, a grant to pursue research related to laser ablation and analysis of fingerprints and the creation of a portable laser capture system for forensic applications. As part of the project, the team is also developing a patent and collaborating with companies and law enforcement officers to develop better techniques for analysing the chemical signatures of fingerprints at crime scenes. While the approach can be used for traditional fingerprint analysis, its real power is in being able to capture, filter and analyse biomolecules and trace substances left by fingerprints, such as DNA or explosives like TNT. It works by focusing a laser, using mirrors and optical fibres, onto a surface containing a fingerprint. Within a surface area the width of 300 microns, the laser heats up the moisture or any water present on the surface, causing chemical bonds in the water to stretch and vibrate. With enough energy focused in a small area, the water explodes, becoming a gas and lifting biomolecules, such as DNA, off the surface. The laser system used by Professor Murray is extremely selective  it causes vibrations in water oxygen-hydrogen bonds more than in any other bonds in other molecules. While this laser ablation process appears disruptive, the team says it is actually much less so than other mechanisms used to remove biomolecules from surfaces. Laser ablation can capture very delicate materials, such as DNA, while preserving their integrity for analysis. Professor Murray explained that after the lase