Stalled proposals on policing the past have left the Police Service of Northern Ireland (PSNI) in an impossible situation, its top officer has warned. 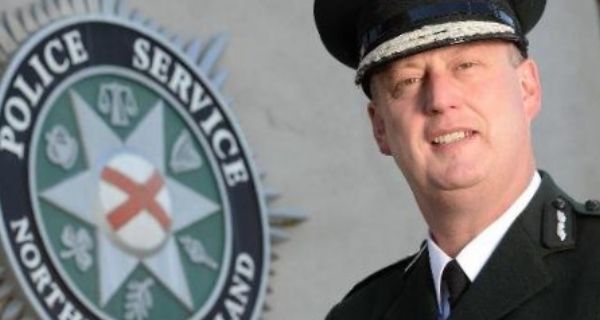 Stalled proposals on policing the past have left the Police Service of Northern Ireland (PSNI) in an impossible situation, its top officer has warned. Chief Constable George Hamilton has broken his silence to defend his force against criticism and deliver a get on with it message to the UK government to circumvent the slow process of dealing with the legacy of The Troubles. Mr Hamilton stressed that delays in progressing the Historical Investigations Unit (HIU) is taking a heavy toll on his service, both in terms of costs and public confidence. He was growing increasingly frustrated that three years on from a political deal on a series of mechanisms to address unresolved conflict cases, the plan is not one further inch forward. The chief constable said if local parties were unable to overcome the impasse blocking implementation of the Stormont House Agreement, then London needed to step up and deliver. In an open letter to elected representatives with responsibility for policing in Northern Ireland, Mr Hamilton said the delays were exacerbating the situation for victims and leaving the force to “soak up” issues that should be dealt with through the new mechanisms. He wrote: The proposal for the Historical Investigations Unit would remove the responsibility for the investigation of acts of violence during The Troubles from the PSNI; allowing us to concentrate on keeping people safe in the present and the future. The initial timescales that we were given for the institutions to be up-and-running was approximately three years. Three years have passed and, despite the efforts of officials working on legislation, nothing has changed. They are actually not one inch further forward. The whole thing is borne out of a sense of `can you just get on with this please`. And actually if Sinn Fein and the DUP and the political parties here can`t get to a consensus to drive it forward in a devolved space, then London need to just get on with it.” He added: And I suppose I am really saying to them, `how high a price are you willing to pay?`. Because it is policing that is actually paying that cost at the moment, in terms of public confidence and also the financial aspect of it. The Stormont House proposals, including a new HIU, a truth recovery body and an oral archive, are currently stalled due to a small number of outstanding disputes. Amid the political impasse on setting up the new structures, Northern Ireland Secretary James Brokenshire has proposed conducting a consultation exercise to establish the wider public`s view  but that has yet to materialise. The chief constable was prompted to write the letter after intense criticism from families bereaved by the Ulster Volunteer Force`s notorious Glenanne gang that claimed 120 victims. The families had urged him not to appeal against a High Court decision that had compelled the PSNI to complete a thematic investigation into the murderous activities of a gang that counted rogue members of the security forces among its members. The killings, which took place in Armagh, Tyrone, Down, Louth and Monaghan between 1972 and 1978, were previously investigated by the now defunct Historical Enquiries Team, however the cold case team was disbanded before the final report was released. Through the Pat Finucane Centre, the families made an impassioned plea to Mr Hamilton to do the “right thing”. But confirming his intention to appeal, Mr Hamilton said the Glenanne case highlighted his difficulties  noting that he was being told he was legally obliged to conduct an inquiry yet was also being warned his service was not independent enough to do so. “I read carefully every word of the open letter published in this paper last week by the Glenanne families”, Mr Hamilton said. “Within weeks of becoming chief constable in 2014, I spoke about this issue, warning that `action is needed if policing and, indeed, our peace process is not to be dragged backward.` “Three years have passed and, despite the efforts of officials wo