Jersey looked-after children could still be at risk of abuse

Children may still be at risk in Jersey as a damning report blamed the islands government not doing enough to prevent decades of physical and sexual abuse. 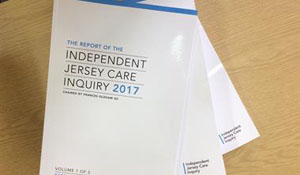 Children may still be at risk in Jersey as a damning report blamed the islands government not doing enough to prevent decades of physical and sexual abuse. The Independent Jersey Care Inquiry found there is no doubt children suffered horrific abuse while in state care from the 1940s onwards. In a report published on Monday (July 3), it detailed 553 alleged offences between 1947 and 2004  mostly at the Haut de la Garenne care home. It said the States of Jersey was ineffectual and neglectful and treated childrens welfare as a low priority, sometimes taking them into care without good cause. While the inquiry recognised the States of Jersey Police (SOJP) was under-resourced, it found that the rarity of serious crime in Jersey meant senior officers lacked the same experience as their colleagues in the UK. The report said: That there were failings is not in dispute. Those failings impacted on children already at a disadvantage, whether through family circumstances, a crime committed against the child or even a crime committed by the child. For many children who were removed from home situations deemed harmful or unsatisfactory, the States of Jersey proved to be an ineffectual and neglectful substitute parent. It added: The panel considers that children may still be at risk in Jersey and that children in the care system are not always receiving the kind or quality of care and support that they need. The Jersey Care Inquiry was launched in 2014 and heard evidence from more than 600 people involved in or affected by the islands care system over 70 years. The report found some children were removed from their families without a statutory basis  often for petty theft or being rude. Once in care they were effectively abandoned by the state with little effort made to check on their quality of life or treatment. No mechanism for reporting abuse was introduced until the 1990s. The inquiry found evidence of a range of serious abuse across several care homes, including sexual exploitation, cruel and degrading beatings and being locked in confined spaces for extended periods. At Haut de la Garenne, staff were ill equipped and poorly trained to deal with childrens needs, if they were trained at all. This was exacerbated by toxic personalities among staff who either practised or tolerated harsh treatment. Many people told the inquiry that as children they felt unable to report abuse as they felt they would not be believed. The report found the neglect and abuse may have been facilitated by the Jersey Way  a culture of maintaining the islands traditions and way of life. Investigators found inappropriate regard for the Jersey Way has blocked new policy and legislation for protecting children. Graham Power, former chief officer of States of Jersey Police, said a disproportionate amount of power in Jersey was left in the hands of a powerful few who resisted change on principle. The inquiry team made eight recommendations for improving services on Jersey including appointing a childrens commissioner and doing more to recruit and retain suitably trained staff. It also proposed demolishing surviving buildings at Haut de la Garenne, which are a reminder of an unhappy past or shameful history for many people. The inquiry said: We recommend that consideration be given as to how the buildings can be demolished and that any youth or outdoor activity or services for children located on the site should be in modern buildings bearing no resemblance to what went before. Responding to the report, Jerseys Chief Minister Ian Gorst apologised to all those who have suffered in the islands care homes. He added that he will not rest until Jerseys children are no longer at risk of further abuse. He said: We failed children who needed our care, who needed to be protected and listened to. Too often, children were not believed. Unpalatable truths were swept under the carpet because it was the easiest thing to do. Those institutional failings