An officer who made headlines by saying black people in gangster-style clothing will be stopped because they fit the profile of criminals in central London has been cleared of intentional racism. 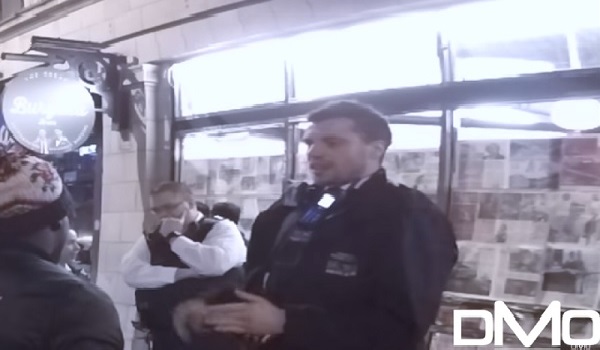 An officer who made headlines by saying black people in gangster-style clothing will be stopped because they fit the profile of criminals in central London has been cleared of intentional racism. The Independent Police Complaints Commission (IPCC) launched an investigation after a well-known DJ was stopped in his convertible Bentley GTC in Piccadilly on January 5. The IPCC stressed at the time that because of the widespread social media attention independent verification was important to ensure public confidence in policing. DMO Deejay, 27, who plays weekly at DSTRKT nightclub in Piccadilly, posted a shortened video clip on YouTube of the incident, which has been seen more than 85,000 times. The Metropolitan Police Service (MPS) officer tells the DJ: This isnt racist, its a fact. Predominantly, the criminal profile of people who do it are black people. So, naturally if you see a car full of black guys, maybe dressed in gangster-style clothing or whatever, when theyre driving down there, theyre getting stopped. We work on criminal profiles. Unfortunately here, the criminal profile for robberies, what we suspect, is IC3 males, generally from Somalia. On Friday (December 8), the IPCC published its findings saying the DJ had decided not to make a formal complaint and did not respond to approaches by its investigators. The car was stopped after being spotted changing lanes randomly without indicating, with the top down in the early hours of a winter morning. Checks also revealed that the vehicle was registered to a dealership rather than an individual. Body-worn police cameras showed the clip seen on YouTube was a small part of a larger exchange, which went on for about 16 minutes, with both the Bentley driver and the officer appearing to behave in a relaxed, friendly and jovial manner throughout. The IPCC concluded there was no evidence the officers comments were intentionally discriminatory or targeted, and he had no history or complaints of discriminatory behaviour in the past. Its statement read: The lead investigator concluded that the comments made about criminal profiling could constitute misconduct, however, in the context of the entire 16 minute conversation, they did not appear to be directed at the man maliciously and the routine stop was appropriate and not motivated by discrimination. The officer had already received management advice from senior officers and had accepted his language had been clumsy. The IPCC said had decided there should be no further action. Operations manager Neil Orbell said: Footage of this exchange attracted a large amount of attention and prompted the IPCC to launch an independent investigation. Body worn camera footage captured the entire exchange between the police officer and his colleagues and two members of the public in the Bentley vehicle. The officer recorded commenting on racial profiling has accepted his comments were clumsy and could easily be misinterpreted and has admitted he has learned from the episode. In January, a senior MPS source told Police Professional that the officer`s behaviour was astounding and has the potential to undo a huge amount of work done to transform the perception of its use of stop and search. However, after the officer`s bodyworn video footage was examined, it was evident the exchange had been carefully edited. IPCC Commissioner Cindy Butts said: This incident has received widespread social media attention and in the press and it is therefore important for public confidence in policing that the matter is independently investigated. That is why we required the Metropolitan Police to refer the incident to the IPCC. The MPS declined to comment further today.