A new technique has been discovered that could make it impossible for criminals to destroy their fingerprints, even by setting fire to them. 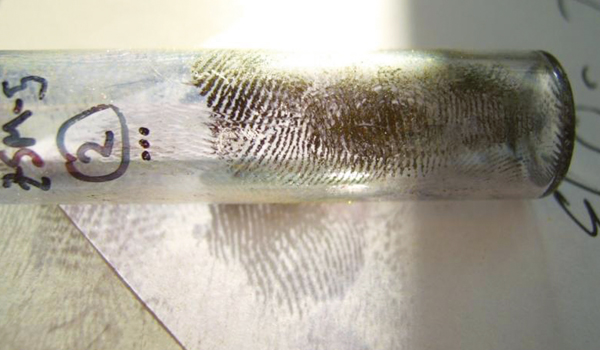 It was no surprise when the Vauxhall Zafira involved in last months fatal hit-and-run incident that left West Midlands grandmother Krishna Devi Droch dead was found burnt-out just a few hours later. Fire can destroy a host of forensic traces, including fibre evidence and DNA. However, a new technique has been developed that promises to make it virtually impossible for criminals to erase their fingerprints from crime scenes. It allows impressions to be recovered from items even after they have been burnt, washed or wiped. I have to be honest and say the initial discovery was totally serendipitous, said Dr Paul Kelly, a reader in inorganic chemistry at Loughborough University who began work on the project seven years ago. We dont have a forensic background. We were looking at some inorganic chemistry and then realised that we were actually developing fingerprints on some glassware that we were exposing to the process we were using. Around that time there were a number of papers out in chemical journals that made it clear people were looking at new techniques to develop fingerprints and that told us this was an important consideration. The team at Loughborough University have developed the new techniques in conjunction with the Defence Science and Technology Laboratory (DSTL), an executive agency of the Ministry of Defence, and staff from the Centre for Applied Science and Technology (CAST), a collective of scientists and engineers who develop technological solutions to fight crime. This advancement opens up possibilities for evidence retrieval in situations where traditional methods either struggle or fail completely  for example, when attempts have been made to destroy print evidence through burning or washing, added Dr Kelly. The process relies on fumes created during a propriety chemical process. Items thought to contain fingerprints are placed in a sealed container and a special powder is degraded into a crystalline form before being heated to form the fumes that develop the prints. The level of detail produced allows forensic scientists to see right down to the pores. Although other techniques for recovering wiped fingerprints exist, they involve multi-stage processes and are therefore far more complex and time consuming. It`s going to be a game changer when it hits the market, said Steve Thornegate, technical lead on the project at DSTL. Its a one-stage process that develops fingerprints on articles that in the past were, quite frankly, difficult or impossible, such as those that had been under a great deal of stress or had been deliberately washed. Conventional fingerprinting techniques enhance the marks left wherever fingers touch surfaces and transfer ridges of natural oils and sweat, but these marks can easily be smeared, washed off or obscured. Tests have shown the new process is capable of recovering fingerprints from ammunition cases that have been fired then washed with acetone and wiped down. It can also be used to recover prints from deformed surfaces that were previously problematic. It could also prove useful in assisting investigations into bombings and arson attacks, as it would allow fingerprints to be recovered from surfaces that have been exposed to heat, such as metallic bomb fragments. Mr Thornegate said the ability to significantly increase fingerprint recovery rates from recovered evidence will mean criminals will find it impossible to conceal or destroy their fingerprints. Although the technology needs further refinement, it will be of significant benefit to forensic scientists across the world, he added. The project has also strengthened links between the university and the two government agencies that assisted in its development. Steve Bleay, a senior forensic scientist at CAST, said he read a paper on what was happening at Loughborough and was immediately interested: I saw it as a revolutionary technique. It was able to do things other processes we had available to us couldnt do. He said the collaboration was effect