Military success against terror networks must be converted into “actionable intelligence” for the global policing family, Interpol insists, after publishing a list of nearly 200 terror suspects. 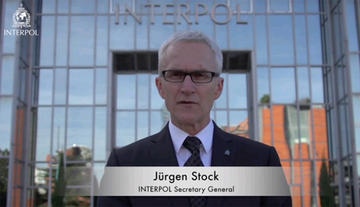 Military success against terror networks must be converted into “actionable intelligence” for the global policing family, Interpol insists, after publishing a list of nearly 200 terror suspects. It is “vital” critical information left by retreating fighters and recovered by coalition forces is quickly shared with the world`s law enforcement community through a secure multilateral platform. Despite the victories in Iraq and Syria against the so-called Islamic State (Daesh), the group retains the ability to “direct or inspire deadly attacks across multiple continents”, warns Interpol Secretary General Jürgen Stock. Mounting pressure on former Daesh strongholds is likely to result in increased numbers of battle-hardened terrorists returning home, fleeing to neighbouring countries, or joining other conflicts. General Secretary Stock added: Experience has shown the essential role that military-police cooperation plays in keeping pace with the threat as it disperses beyond the conflict zone. The fears expressed by Mr Stock come as Interpol published a list of 173 suspected Daesh personnel believed to have been trained to orchestrate a terror attack in Europe. The international organisation created the list using information discovered through investigating the group`s “hiding places”. The list contains names, the date they were recruited, last address, the mosque they have been praying at, their mother`s name and any photographs. And it defines the group of extremists as individuals who have been “trained to build and position improvised explosive devices in order to cause serious deaths and injuries”. “It is believed that they can travel internationally, to participate in terrorist activities,” the list stated. The information was originally collected by US intelligence, before it was handed over to the FBI who passed it on to Interpol for it to be shared. A note attached to the list said suspects have been “identified through materials found in the hiding places” of Daesh, who “may have manifested willingness to commit a suicidal attack”. In all, details of more than 18,000 Foreign Terrorist Fighters have now been shared via Interpol`s global network with an increasing amount being sourced from the conflict zones. Biometric data such as photos, fingerprints and DNA profiles have already led to the positive identification of terrorists around the world, including the use of facial recognition systems. Interpol projects Vennlig and Hamah have enabled evidence of terrorist activity collected from Iraq and Afghanistan to be shared with law enforcement, intelligence and defence agencies in more than 60 countries, leading to the identification of previously unknown terrorists and facilitation networks. Once terrorist information is shared at the global level, every traffic check, passport control or random search holds the potential for a break in a terrorism investigation or to foil an evolving plot, said Mr Stock. However, countries worldwide need to ensure their frontline officers have direct access to Interpols databases in order to make these crucial identifications and prevent terrorists from traveling with ease to conduct attacks, he added, pointing to the recent statements by the G7 and G20 calling for countries to make full use of the organisation`s information systems. With an increasing number of individuals involved in terrorist attacks having a criminal background, Interpols Secretary General underlined the need for the most basic information stored in national police systems to be shared at the global level. Fingerprint checks of arrested foreign nationals by one European country against Interpols databases resulted in 11 hits in just one two-week period in June. Individuals linked to recent terrorist attacks in Europe, including at least one suspect travelling on a passport recorded in the Stolen and Lost Travel Documents database, had been subjects of Interpols alerts prior to the attacks. Unless and until countries ensure vital policing info