Blank-firing pistols are increasingly being sourced from legitimate and legal dealers and converted into lethal guns before being sold on to criminals, Greater Manchester Police (GMP) has warned. 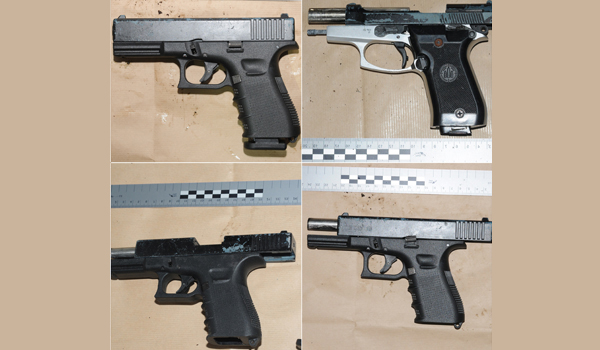 GMP says the issue around Retay guns, which are legal semi-automatic blank-firing pistols with a similar appearance to illegal firearms, is now a “growing concern” nationally.

Since the beginning of the year around 130 converted Retays have been recovered across the UK. Eighteen of those were seized by GMP in Greater Manchester.

Retays are readily available online and the conversion of these weapons into live firing guns is now a priority for detectives both from GMP and across the country.

Alan Bates, GMP’s firearms and licensing manager, said: “The issue around Retay guns is of growing concern, not only in our region but across the country, and we’re working alongside partners and other law enforcement agencies to crack down on those creating lethal weapons and putting lives at risk.”

GMP is now urging registered firearms dealers and other retailers to contact it with any “suspicious activity”.

The warning comes after two men who converted blank-firing pistols into lethal guns and sold them on were jailed for a combined total of 20 years this week.

It followed an investigation by GMP’s Serious and Organised Crime Group into illegally converted guns, which were then being passed on to criminals across the region.

“This case shows that blank-firing pistols are being sourced from legitimate and legal dealers and other retailers but they are being illegally converted before being misused by criminals,” said Mr Bates.

“Registered firearms dealers and other retailers are being asked to contact us with any unusual transactions or suspicious activity – even the smallest bit of information could be a huge step and ultimately save a life.

“It’s illegal to possess most firearms without a licence in the UK and law enforcement across the country are working hard and sharing intelligence to half criminals’ ability to acquire, distribute and sell firearms. It’s an offence under the Firearms Act to convert an imitation or realistic imitation firearm and it’s also an offence to alter the colour of an imitation firearm, which are sold with at least 50 per cent of their surface area painted a bright colour.”

The GMP investigation, known as Operation Lyra, was launched in 2020 into the activities of two men from Oldham who were involved in the illegal conversion of Retay weapons.

Across the whole operation, a total of ten converted guns were found and seized by detectives. Six of these were found at the address of Corey Atkinson on Farm Road in Oldham and the rest linked by forensics and intelligence by detectives.

Atkinson was found to be illegally converting Retay weapons and this was further evidenced following a DNA ‘hit’ on a firearm found by a police officer in Wigan on September 21 last year after a member of the public reported “two suspicious males” in a wooded area.

“We received the report raising concerns about two suspicious males near Edinburgh Close and when officers attended, they noticed an area of disturbed ground with two large logs placed over the top and a distinct smell of lubricant around a box wrapped in a black bin liner,” said GMP.

“The box, wrapped in nappies, had two handguns and 24 rounds of ammunition inside. A proactive investigation was already on-going into 26-year-old Atkinson but the DNA prints found on the box also matched to him.”

On October 21, 2020, officers carried out a search at his address in Oldham where they discovered six converted Retay guns, 46 modified bullets and 38 other bullets, sawn-off metal tubes and a cutting disc.

Detectives also later found that another man, Mark McNamara, of Bankfield Drive, Oldham, had arranged and purchased a number of the blank-firing Retays on behalf of Atkinson and was also involved in the test firing of weapons.

McNamara, 29, was previously jailed for six years on November 13, 2020, for possession of firearms but further discoveries from text message exchanges were made that found a wider conspiracy alongside Atkinson.

A total of five Retay guns were bought by McNamara together with an online order of stainless steel tubes, which were used in the conversion. Officers building the case carried out a raid at McNamara’s address on Bankfield Drive on October 12 last year, where a black pistol was found hidden in the rear garden along with six loose rounds.

GMP said messages from McNamara’s girlfriend’s phone showed that he had told her “he had been involved with testing guns at Daisy Nook on October 1, 2020, as part of a sales negotiation”.

The pair were sentenced at Manchester Minshull Street on Monday (November 30). They both pleaded guilty to conspiracy to sell/transfer firearms and ammunition and conspiracy to convert imitation firearms into prohibited weapons. Atkinson was jailed for 12 years and McNamara was sentenced to eight years.

Detective Superintendent Chris Mossop, who led the investigation, said the “significant sentences” were a “huge step forward” in tackling those involved in converting legal firearms into deadly weapons.

“We’re working relentlessly to really drive a wedge between organised crime groups and the possession, supply and use of weapons in Greater Manchester,” he added.

“Atkinson was clearly an illegal converter with the help of McNamara – the pair were working together to turn Retay guns into live firing deadly weapons where they could end up in the hands of criminals and ultimately cost someone’s life.”

“These two men are two more put behind bars and therefore a gap in the supply chain for criminals. We will not stop pursuing such dangerous and scheming individuals across our region and our focus remains on taking strong action against those in society who brazenly involve themselves in the use, trade and criminal conversion of firearms in Greater Manchester.

“We will ensure that those we suspect of having such involvement will face prosecution and be taken from our streets.”