House of Lords support for greater legal protection for officers

The Police Federation of England and Wales (PFEW) believes officers are one step closer to being better protected by law after winning support from within the House of Lords. 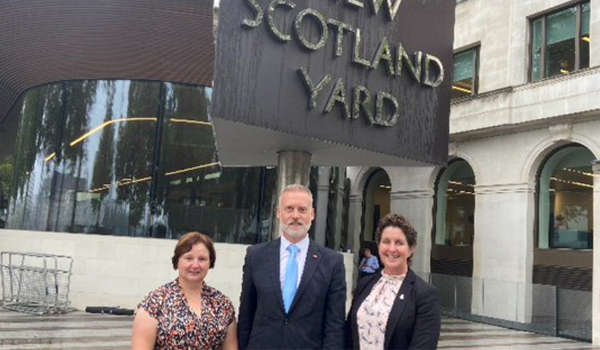 The PFEW is pressing for three amendments to the Police, Crime, Sentencing and Courts Bill to make it “fit for purpose” by giving officers greater legal support.

And following a “positive” meeting between the PFEW’s Parliamentary Sub-committee and Lord Hogan-Howe, Lord Bach and Lord Coaker at New Scotland Yard this week, it says there is “much support” from peers for the amendments.

One proposal would see drivers not only stop under section 163, but also switch off their engine. The PFEW is also suggesting police officers should have the power to ask occupants of the vehicle to exit upon request.

Figures show one in four roads policing officers were subjected to a vehicle being used as weapon against them during the past year.

“As part of our police drivers campaign, we are also calling for the law to protect officers who have to engage in pursuits,” said the PFEW.

“Thanks to years of PFEW lobbying, a new legal test will be applied meaning their driving will be measured against that of a ‘careful and competent police driver’ – but this could still leave officers exposed.

“We are pushing the Government to consider adding a ‘reasonableness’ defence clause to the Bill to give officers flexibility to act instinctively to keep the public safe.

“This would take into account what officers believe they are responding to and the threat that is posed. Training cannot account for all situations and officers need to be able to act to keep the public safe.”

The PFEW is also proposing legislation that would give legally qualified persons power to impose deadlines on disciplinary investigations that have dragged on for a year.

Through its Time Limits campaign, it wants investigations to be concluded within 12 months from the moment an allegation is made.

The PFEW said its tabled amendments, which have already gained cross-party support, will now be taken forward to the committee stage and will be discussed in detail by the House of Lords.

PFEW pursuits and driver training lead Tim Rogers said: “It is exceptional news that peers understand the amendments we have tabled and what is required.

“They have agreed they are an essential aspect of making the Bill fit for purpose to ensure our colleagues covering the millions of miles of our roads network to keep the public safe are given the support and protection they deserve and are not penalised for doing their jobs.

“To make the Bill achieve what legislators intended we need this amendment.”

Regarding the Time Limits campaign, PFEW conduct and performance lead Phill Matthews said: “We’ve explained our rationale on why we think it is important for both complainants, members of the public and our police colleagues to get complaints dealt with within a 12-month timescale – or if not to have some legal oversight on why the investigations isn’t moving at a reasonable and fair pace. The Lords have understood that and are prepared to support that in the Bill, which is great news.”

PFEW Parliamentary Sub-committee Secretary Tiff Lynch said: “It was a really important day for the Parliamentary Sub-committee where Met Fed chair Ken Marsh, Tim Rogers, Phill Matthews, PFEW Welsh lead Nicky Ryan and myself, met peers from the House of Lords prior to the debate on the second reading of the Police, Crime, Sentencing and Courts Bill.

“It will now move into the committee stage, and I am really grateful to those peers in the House of Lords to be showing us so much support for our amendments. We will continue pushing towards a change in legislation which will support and protect our members.”