Patients in a medium-secure hospital will now be able to testify in magistrates courts as part of a network of live-link video connections across Sussex that is helping to make justice swifter and more accessible. 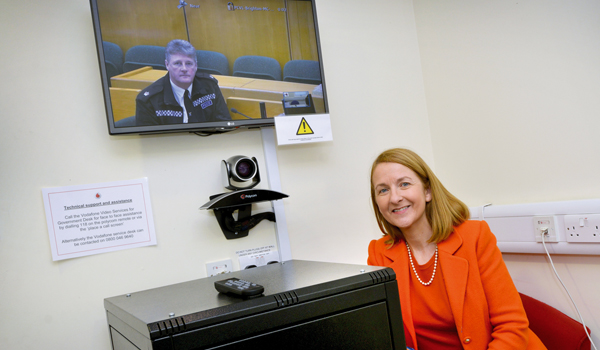 Patients in a medium-secure hospital will now be able to testify in magistrates courts as part of a network of live-link video connections across Sussex that is helping to make justice swifter and more accessible.

The new live-link at Hellingly hospital is designed to avoid patient stress from being held in court custody before and after giving evidence and the costs associated with moving patients to and from court  saving around £1,300 per patient per day.

Sussex Partnership NHS Trust clinical director and consultant psychiatrist Richard Noon said attending court for patients requires a considerable amount of planning and staff time to ensure that both the patient and the public remain safe.

A 15-minute appearance to enter a plea can in reality involve around six hours of staff time as we have to organise things with the court, book transport and accompany the patient. At an average cost of £1,300 per court appearance it doesnt take long for costs to mount up, especially when trials can last for a number of weeks, he added.

The new live-link system will make the process more efficient and manageable, both for us and for the courts, freeing-up time and resources, which could be better spent caring for patients.

With police officers in Sussex spending on average five and a half hours at court per appearance, the video links are generating significant time-savings.

The latest development could eventually save the force more than £5 million. The ongoing VEJ programme will see around 14 video end points at police locations; a further six are virtual courts where initially those remanded into police custody will give evidence.

Ms Bourne said the interests of victims and witnesses must come first, adding: This is why I am leading the VEJ project across the South East to scale up the use of technology and improve the experience of victims and witnesses giving them swifter access to justice. This will also save time and money for police officers, courts, prison staff and other partners.

Having a live-link room up and running in Hellingly hospital is another element in ensuring that VEJ speeds up justice and at the same time saves money and prevents often very vulnerable patients having to be held in court custody.

Ms Bourne said it was a perfect example of the police, the courts and the health authorities working together in partnership for the benefit of victims.

Victims often suffer anxiety about their court appearances and witnesses often do not appear because of the inconvenience and impact on their lives. We owe it to the people who have the courage to report crimes and those who will testify on their behalf to make this a more comfortable process, capitalising on technology that is already available, she added.

Sir Oliver Heald QC, Minister of State for Courts and Justice, welcomed the latest initiative, adding: We have a world leading legal system and are investing £1

billion to modernise our courts and deliver a fully-connected criminal courtroom by 2020.

By making the best use of technology we can improve access to justice and the experience for all court users, in particular vulnerable victims and witnesses. I welcome the adoption of innovation across the criminal justice system, which will help to deliver swifter justice.

Sussex Police Detective Superintendent Nick May said the addition of Hellingly to the network and Sussex Partnership Trust means everyone is linked up and open to the future possibilities of VEJ.

Giving evidence to court is an essential part of a police officers job and anything that supports the valuable work of magistrates court is positive. But on average where officers have to give evidence in Sussex it can take up to five and half hours and this speeds that up.

This initiative will substantially increase the amo

CCTV gets the MIDAS touch