The National Police Air Service (NPAS) has received a prestigious award for its work in the aftermath of two major terror attacks. 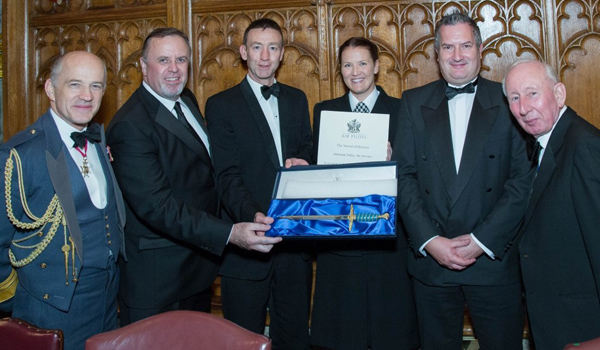 The National Police Air Service (NPAS) has received a prestigious award for its work in the aftermath of two major terror attacks. Officers were presented with the Sword of Honour for outstanding contribution to aviation by the Honorary Company of Air Pilots at a ceremony in London last week. The award  which recognises the highest achievements by pilots and air crews worldwide  followed NPASs unprecedented response to the terror attacks in Westminster and Manchester earlier this year. In the Westminster attack, the first NPAS aircraft was at the scene in less than six minutes before being joined by colleagues from sites across the country. NPAS also maintained a constant presence for the first nine hours after the Manchester bombing in May. Chief Constable Dee Collins, Air Operations Certificate Holder for NPAS, said: I am delighted that NPAS have been recognised for their outstanding response to two major national incidents, one in Westminster and one in Manchester earlier this year. The crews, across a number of NPAS bases and within the National Operations Centre, provided an unprecedented response and invaluable command and control of the incidents, without which, both colleagues and communities would have been at much greater risk. Every day crews carry out remarkable work from a national network of 15 bases to keep communities safe and it is highly fitting that NPAS should receive such a prestigious award. NPAS is managed by West Yorkshire Police on behalf of all Home Office forces and operates as an entirely borderless service. In 2016, its 350 staff provided 18,000 flying hours and conducted or supported more than 28,000 searches. Meanwhile, its annual budget has been cut from £53.5 million to £38.5 million over the last five years. Mark Burns-Williamson, police and crime commissioner for West Yorkshire, said the award reflects the outstanding efforts and work carried out in response to two major national incidents. He added: The response provided demonstrates the value of borderless air support provision to UK policing.