A cyberattack on the Metropolitan Police Service (MPS) has resulted in a number of unauthorised, bizarre and offencive messages being published on its website, Twitter account and sent out as emails. 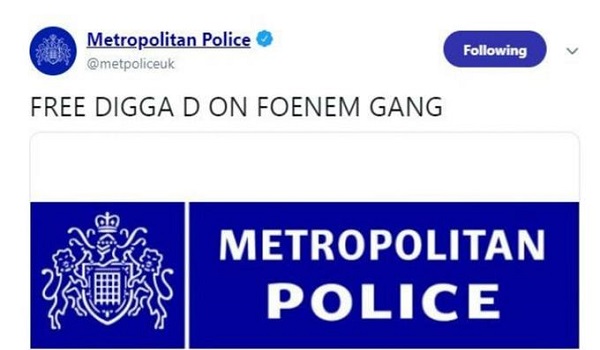 After sending out a series of test messages on Friday evening (July 19), the hackers issued a press release at 11.36pm stating: “F..k the police free da gang!! #chucklinghella”. The same message appeared on the Twitter account. One minute later, a second message appeared reading: “Free Digga D on foemen gang”.

Digga D is a controversial UK drill rap artist, currently in prison. YouTube videos of four of his songs were removed last summer as part of the MPS’s attempts to reduce the number of drill videos circulating online as the genre has been linked to incidents of inciting violence.

The artist is the subject of a criminal behaviour order meaning he is unable to release music without having it authorised by the police first.

The unauthorised posts also linked to press releases the hackers had apparently put together on the MPS’s website regarding the rapper and an apparently missing child. One tweet appeared to take aim at other individuals. It read: “We are the police… Cal and dylan are gay btw.”

The press releases and tweets have since been removed.

In a statement, the MPS said the security breach related to an online provider called MyNewsDesk which it uses to issue news releases and other content. When a story is published via MyNewsDesk, it appears on the MPS website and Twitter accounts and generates an email to subscribers.

The statement said: “Last night, Friday July 19, unauthorised messages appeared on the news section of our website as well as on the @metpoliceuk Twitter feed and in emails sent to subscribers.

“While we are still working to establish exactly what happened, we have begun making changes to our access arrangements to MyNewsDesk. We apologise to our subscribers and followers for the messages they have received.

“At this stage, we are confident the only security issue relates to access to our MyNewsDesk account. There has been no ‘hack’ of the Met Police’s own IT infrastructure. We are assessing to establish what criminal offences have been committed.”

Earlier, MPS Superintendent Roy Smith had tweeted: “Our media team are working hard to delete the messages and ensure the security of the account. Please ignore any Tweets until we verify that it is back under official control.”