An off-duty police officer and a paramedic were splashed in the face with an unknown corrosive substance after stopping to help when a car that collided with a lorry burst into flames. 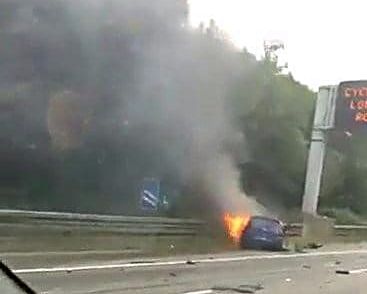 An off-duty police officer and a paramedic were splashed in the face with an unknown corrosive substance after stopping to help when a car that collided with a lorry burst into flames. The two were among a group of poeple who tried to assist as they approached a blazing vehicle, known to be stolen, on the M11 between Chigwell and Loughton in Essex on Friday evening (July 28). Essex Police described the actions of two suspects who launched the unprovoked attack as a shocking incident. The officer and emergency worker, who had gone to provide urgent medical care, were treated in hospital for unspecified injuries. They will not likely suffer any long-term effects and the lorry driver was uninjured, according to a force statement. Chief Superintendent Luke Collison of Essex Police, said: We have launched a significant investigation to track down the suspects and bring them to justice. Good Samaritans who witnessed a serious collision were met by two dangerous offenders and seriously assaulted. We are thankful that their injuries are not worse and that no other members of the public were seriously harmed. The force had been notified that a VW Golf had been stolen from outside a shop in Buckhurst Hill, and the car owner ran from the scene after he saw that one of the alleged thieves carried a knife. With no verbal or physical threats issued, Essex Police said the two suspects then drove away in the victim`s car. This was not the car that caught fire. Another blue VW Golf, containing more suspects, was present when the vehicle was stolen on Queens Road. It followed the victim`s vehicle onto the M11 and then collided with the lorry. The force said the victim`s vehicle is yet to be recovered. Essex Police said as those inside the stolen Golf got out of the vehicle, they sprayed an unknown substance into the faces of the officer and the emergency responders. The news comes as leading businesses have agreed to a voluntary sales ban of household corrosive cleaning products to under 18s in response to the surge in acid attacks on the UK`s streets. Last year there were 455 acid attacks reported to the Metropolitan Police Service alone  up from 261 and a rise of 74 per cent on 2015  with most victims and offenders aged between 16 and 29. Some 20 people were convicted of offences but more than a third of perpetrators were never caught. As part of the multi-agency approach, MPS officers are also being given 1,000 emergency acid response kits. Response cars across the capital are being supplied with five litre bottles of water to give victims of acid attacks vital immediate treatment on the scene. Response officers will also receive protective equipment and medical advice on how to treat injured victims. A trial scheme in east London will allow officers to safely test liquids that criminals often carry in innocent looking soft drink bottles in a stop and search operation. Kevin Brown, of East of England Ambulance Service, said of the latest incident: “This unprovoked attack on two Good Samaritans who were trying to help at the scene of a road traffic collision is deplorable.