Game on to refresh driver training

Officers have been testing the latest state-of-the-art PlayStation game to explore ways of evolving and refreshing driver training methods. Four specialist operations officers from Lincolnshire Police spent the day at the Silverstone race circuit where they tested the newest Gran Turismo game and its effects on driving to determine whether it could help boost established police training structures. 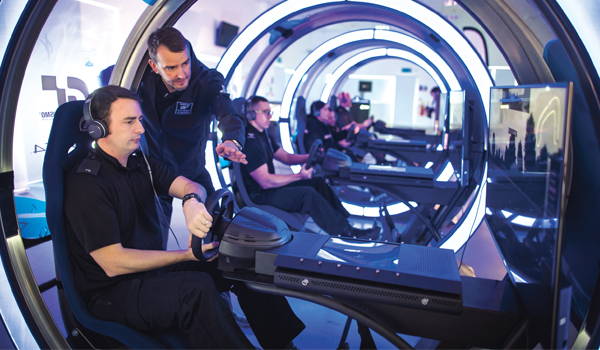 Officers have been testing the latest state-of-the-art PlayStation game to explore ways of evolving and refreshing driver training methods. Four specialist operations officers from Lincolnshire Police spent the day at the Silverstone race circuit where they tested the newest Gran Turismo game and its effects on driving to determine whether it could help boost established police training structures. T/Assistant Chief Constable Shaun West explained: Our officers met with experts at the GT Academy at Silverstone to investigate whether the alternate route they offer to professional drivers  training players virtually using Gran Turismo and then transitioning them to real-world track driving  could offer Lincolnshire Police an alternate way of looking at how we develop and supplement our existing training methods. After clocking an initial lap time at Silverstone, the officers were coached using GT Sport  including an all-new virtual reality (VR) mode-to develop their driving skills by highlighting and improving efficiency while playing the game. Any areas for improvement, such as under or oversteer, braking late and carrying too much speed in corners, were identified, with GT Sport used to demonstrate correct techniques and best practice to keep the car safe. The officers then returned to the track to see if the virtual reality coaching had helped them in real-world driving. The results showed that some of the officers managed to reduce their lap times and increase smoothness and stability in their driving. Mr West said: There will never be a replacement for traditional training methods but we are always looking for innovative ways to supplement the learning of our officers and staff. If Gran Turismo can help to train world class racing drivers, then we were keen to explore whether it could offer anything to our officers and help expand the way we think about evolving and refreshing our training methods. Its important to emphasise that exploring other methods such as this is not in any way seeking to substitute the rigorous training we already have in place but is simply another way to potentially bolster those existing programmes that our officers undertake. Laurence Wiltshire, managing director of GT Academy, said: GT Academy has proven that the skills learnt via Gran Turismo directly transfer from the virtual track. This is thanks to the incredibly accurate simulation of the tracks but more importantly the simulation of the cars, their physics and how they handle GT Sport is the best in the series history and, with the addition of VR mode, offers the most realistic driving simulation yet. Its one thing to train racing drivers but the idea that a game could help officers respond to emergencies more efficiently is mind-blowing. Mr West added: Because road safety is of paramount importance in Lincolnshire we want to ensure our practices are as up-to-date and innovative as possible. Our F4tal 4 campaign focuses on the four main causes of injury and death on the roads: drink/drug-driving, speeding, mobile phones and seatbelts. Anyone who chooses not to comply with the standards outlined in Fatal4, and is therefore putting themselves and other members of the public at risk, must do so within the realms of a game like GT Sport or on a racetrack like Silverstone. We dont want that kind of driving on Lincolnshires roads. Also, were really keen to progress our immersive learning and exploring this type of training fits that brief well. We regularly ask ourselves: what more could we do to ensure our officers are trained to the highest standards while also accommodating the needs of a workforce that works varied hours, in a number of locations, and has different needs and expectations of respective roles? Taking technology like we trialed in GT Sport, and the software that is in devices such as our mobile data terminals which, for example, may allow us to offer immersive learning in areas such as child sexual exploitation, means we are exploring different ways to en