Before he leaves office later this month, Steve White sheds light on the battle to reform the Police Federation of England and Wales and ensure it is listened to at every level. 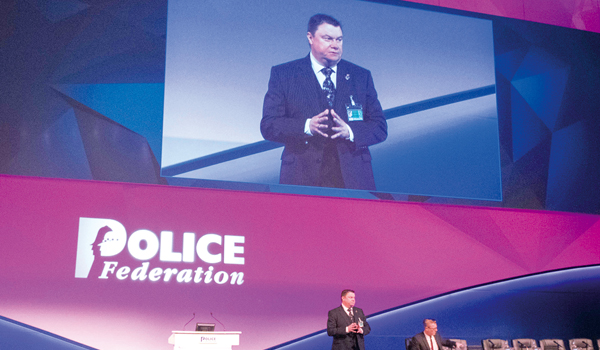 Steve Whites election as chair of the Police Federation of England and Wales (PFEW) in 2014 was in some ways a microcosm of the wider organisation. The final vote being decided on the toss of a coin reflected the deep-seated division within the PFEW at the time; a federation split between a path of radical reform or a more conservative approach. That some change was needed was beyond question. Around the start of the decade, the reputation of the PFEW with the public, the Government and within policing was at an all-time low. The organisation had been beset by accusations of bullying, financial mismanagement and a lack of transparency, which had the effect of undermining the trust of its members and its ability to serve as an influential voice for the service. It had failed to engage with successive governments, reaching a head at its infamous annual conference in 2015 when then-Home Secretary Theresa May was jeered after accusing the PFEW of crying wolf over the extent of funding cuts. At the same time, the organisation was stumbling on with archaic structures, some of which dated back to its inception in 1919. Regulations required every level of representation, from the local branches to its governing body, to have equal numbers of representatives for each federated rank. This was despite the fact that police constables made up 77 per cent of the PFEWs membership, causing resentment among those who felt their views were not being listened to. It also created unnecessary costs by requiring disproportionate representation for inspectors and sergeants, and left some constable representatives overstretched as they tried to serve much wider constituencies. When I came to Federation House as a national representative, I was quite frankly shocked at how successful the organisation had been despite the structures and the processes under which it seemed to operate, said Mr White. The Federation can only do things for its members if it has influence, but I felt as though it didnt have any in terms of the way that it portrayed itself and the way it was structured to be able to respond to things. Bearing in mind this was at a time when the two Winsor reviews were attacking police pay and conditions, the structures we had as an organisation to respond simply werent up to meeting the fast pace of change that we were facing. Mr White felt the organisation needed to change, and an induction of fresh ideas, and that he could make a positive difference, so decided to stand for chair on a ticket of saying that the organisation had to put the members back at the heart of everything it did and rebuild its relationship with the Government so it could bring about change and influence for the benefit of members. This ticket of reform is what Mr White credits with his making it to the final two candidates in the 2014 election. However, while the majority of the PFEWs membership may have recognised the need for radical change, its governing body  the Joint Central Committee (JCC)  was essentially split down the middle. This disagreement over whether to commit to extreme reforms or take a more cautious approach is what led to the notorious coin toss. Had it landed another way, the PFEWs progress over the last few years could have taken a very different direction. The 2014 review of the PFEW, led by Sir David Normington, contained a scathing criticism of its management and culture at the time, condemning bad behaviour in its Leatherhead headquarters and its 30 secretive bank accounts containing an estimated £30 million. At that years conference, Mrs May notoriously promised to force reform on the organisation if it did not urgently change its ways. The PFEW agreed to all 36 recommendations that same day. As of August 2017, 29 of these proposals had technically been delivered. These include several major changes, such as introducing national guidelines for expenses and hospitality policies, and information on its accounts has been made public. However, the rate of progress under Mr Whites leade