Thermal cameras are to follow in a “future`s bright” message as Devon and Cornwall Police, together with Dorset Police, have become the first forces in the country to launch an operational drone unit. 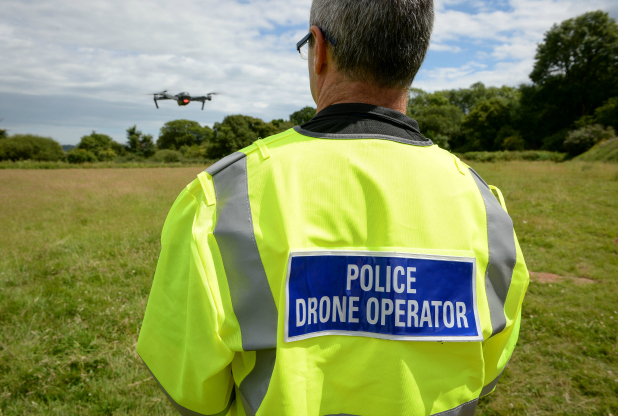 Thermal cameras are to follow in a “future`s bright” message as Devon and Cornwall Police, together with Dorset Police, have become the first forces in the country to launch an operational drone unit. The latest in-drone technology has been trialled “continuously” by the respective forces since November 2015 and they say that such has been their benefit, a dedicated police unit has been created  the first of its kind. There are currently six drones operating across both forces  four DJI Inspire 1s and two DJI Mavics. By next year that number could have risen to 12 drones helping to monitor the 1,830 square miles across the combined forces` countryside with more than 600 miles of coastline under its wings, covering a population of 2.1 million. The unit currently has three staff but could reach up to 40 trained officers. The multi-faceted drones offer use for missing person searches in coastal and woodland environs, crime scene photography, road traffic collisions through to firearm or terrorist incidents. Chief Superintendent Jim Nye, commander for the Alliance Operations Department, wants the unit to help shape how other forces use drone technology in the future but they will not replace the assistance provided by manned aircraft such as helicopters from the National Police Air Service (NPAS). He said: “It will allow officers to gain vital information quickly, safely and allow us to respond effectively at the scene. “Being the first police forces in the country to have a standalone, fully operational drone unit is a great source of pride for the alliance.” He added: “The reason we`ve introduced a dedicated drone team is to respond to the geography that we police. “Devon, Cornwall and Dorset is 225 miles across with 1,000 kilometres of coastline so we will use the drones for lower end activities such as photographs of collision sites and crime scenes. It is not to replace NPAS but is to complement that. “This technology offers a highly cost effective approach in supporting our officers on the ground in operational policing. “The drones we have so far have to go out in fair weather which isn`t great, but the new cameras we will be getting in the autumn will have waterproof protection. “It is then possible to add thermal cameras onto them so the future is very bright in this area. “So far we`ve used drones to search for missing people across the moorlands, woodlands, coast and sea. More recently, as everyone saw with the Exeter fire, we used the drone to downlink footage to the fire service so they could look at how to fight it.” The drone unit was launched with a demonstration at Westpoint in Exeter on Thursday (July 13). The display saw officers search for a high risk missing person who was believed to be in possession of a shotgun but whose car had been located. Drone team manager, Andy Hamilton, said: “Having a drone we can go straight up to 120 metres and get a spacial awareness of how to plan the search. “We were able to get the drone down towards the vehicle which we would not want to get officers near because of the risk of getting shot. “The pilot looks at the footage as they are flying and it is possible to put the footage onto another screen. We`re also looking at the option of getting the stream back to our control room which we tested the other day.” On Twitter @PoliceDrones has been keeping the public informed about where and when the drone is in operational use across the county since the trial begun. While NPAS and its fleet of 19 helicopters do not operate Unmanned Aerial Systems (UAS), the body welcomes their advent and the permanence provided by the Devon, Cornwall and Dorset joint venture. “We don`t see it as a threat and is not adversarial in any way,” said Assistant Operations Director Russ Woolford, NPAS lead on drones. He added: “NPAS supports the use of drones in policing and is committed to achieving their effective, ethical and safe operation as part of the overall capability available for policing from the air. “I am