Funding calls must be based on evidence not assertions, says Home Secretary

Police and crime commissioners need to adapt to rising demand by cutting crime instead of just lobbying the Government for money, the Home Secretary has said. 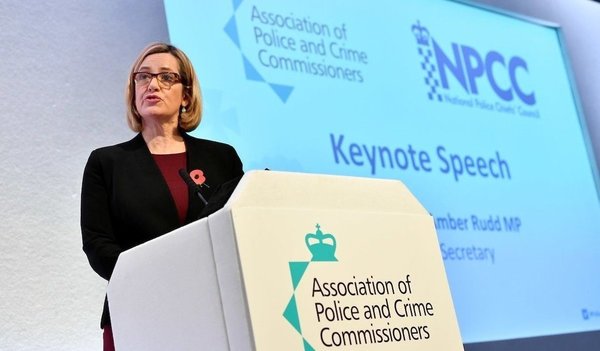 Police and crime commissioners need to adapt to rising demand by cutting crime instead of just lobbying the Government for money, the Home Secretary has said. Amber Rudd told the Association of PCCs/National Police Chiefs Council summit that when faced with rising crime figures, PCCs need to outline how they will make the public safer rather than simply writing press releases asking for further funding. Ms Rudd claimed forces are sitting on £1.6 billion in reserves and still have room to make further efficiency savings, adding that funding calls need to be based on evidence not assertions. However, she recognised the additional pressure that increasingly complex crimes have placed on policing and said that the Home Office is considering forces concerns over budgets. The Government is currently conducting a review to better understand the true level of demand on policing and whether extra resources are needed. Ms Rudd said: Of course part of being a police and crime commissioner is about speaking to the Government about resourcing but it mustnt just be about lobbying the Government for money. It needs to be about cutting crime, delivering on the priorities you were elected on and being held to account by local people in your area when you dont. So when crime stats go up, I dont just want to see you reaching for a pen to write a press release asking for more money from the Government, I want you to tell your local communities and the victims in your area what your plan is to make them safer. Because policing can make a difference. Crime Survey for England and Wales data shows overall offending has reduced from around 19 million in 1995 to 5.8 million in 2017, and by nine per cent over the last year alone. However, this does not include the approximately five million fraud and computer misuse offences committed this year  or the 13 per cent rise in police recorded crime. Recorded violent and sexual crimes have also increased, with the homicide rate up eight per cent on last year. Ms Rudd said these figures have not been consistent across the country  the East Midlands region has seen a 35 per cent rise in murder while the east of England has seen a 19 per cent reduction. She claimed this demonstrates that local policing can make a difference to pressures in a local area. Overall funding for policing is due to increase to £12.3 billion by 2019/20 but many PCCs and senior officers raised concerns that the additional pressures caused by crimes like child sex abuse and cybercrime mean forces can no longer respond to all demand. Nottinghamshire PCC Paddy Tipping told delegates that Ms Rudd failed to provide the full assessment on reserves held by forces, which had been made clear in the joint NPCC/APCC funding submission. He said she failed to say that overall reserves have fallen by 22 per cent this year and are set to fall by a further 35 per cent next year. And the majority of reserves left are earmarked for investment. Mr Tipping warned that those reserves belong to 43 forces and some of those forces auditors and HMIC are saying their reserves are too low and they need to make a difference. Last month, Bedfordshire PCC Kathryn Holloway claimed the Government has demonstrated a fundamental misunderstanding of the forces budget after it said Bedfordshire has £13.2 million available in its reserves. The Metropolitan Police Service has also warned it may have to review which specialisms it can continue to afford if extra funding is not secured in this years budget settlement. The Home Office plans to give officers more powers to help them respond more efficiently to demand. It recently published a consultation on measures including preventing children from purchasing knives online and banning people from carrying acid in public without a good reason. It will also soon finish a review of how to respond to moped-enabled crime, with Ms Rudd promising there will be a change in the protections given to officers. Sara Thornton, chair of