Action Fraud has issued a public warning highlighting the most convincing phishing email it has ever seen. 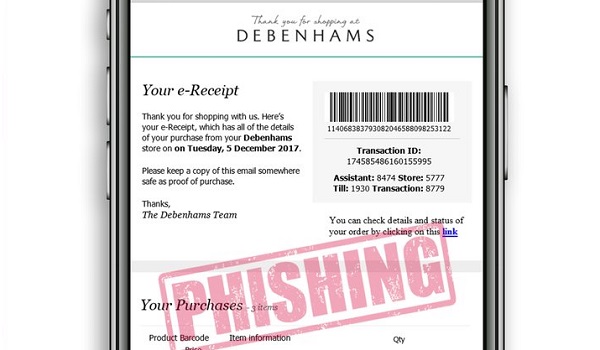 Action Fraud has issued a public warning highlighting the most convincing phishing email it has ever seen. Fraud officers described the fake e-receipt message as an exact replica of a real message from the clothing store Debenhams. More than 55 people have already raised concerns over the phishing attempt, which tries to trick recipients into opening it and potentially infecting their computers with malware. Action Fraud pointed out that the email is being sent from personal accounts rather than an official Debenhams email address to help the public recognise it as a scam. Data from Comodo Security shows around half of users click on links in emails from unknown senders, putting them at risk of falling victim to online fraud. Approximately two million fraud incidents were reported in 2017.