A French police officer has taken home the top prize in an international law enforcement photo competition  as his colleagues share pictures highlighting their poor conditions. 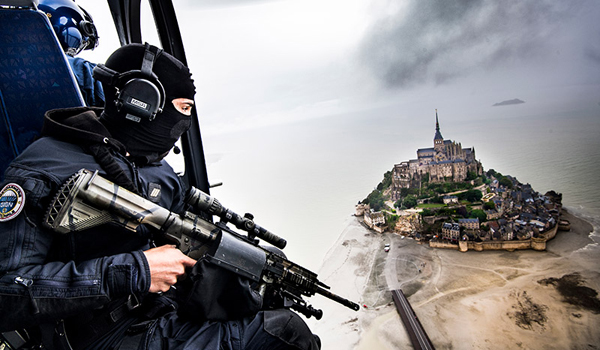 A French police officer has taken home the top prize in an international law enforcement photo competition  as his colleagues share pictures highlighting their poor conditions. Fabrice Balsamo, from the National Gendarmerie, placed first in Europols annual photo contest for his shot of armed officers circling over Mont St Michel in a security operation at the start of the Tour de France. Runner-up was Diego Jesus Lopez Cantos, from Spain, for his picture of officers on a fiery training exercise, and Austrias Alfred Effenberger took third for an image of police motorcyclists on patrol.

(Pictures: Europol) Meanwhile, French officers have been posting photos online in their own competition to draw attention to their under-resourcing. The Union des Policiers Nationaux Indépendants (UPNI) has received hundreds of submissions, with images allegedly showing cockroach-infested police stations, damaged vehicles and decrepit buildings. One picture appears to show a police car with 500,000 kilometres on the clock, with another detailing blocked urinals in a station toilet.

(Pictures: UPNI) The photos  posted on the UPNIs Facebook page  have not been verified, but the organisation intends to invite journalists to see the conditions themselves once the contest ends on September 10. It also plans to send a physical photo album to Frances Interior Minister, Gérard Collomb. The French government has pledged 250,000 for a public security plan that includes measures to upgrade the Gendarmeries estates.