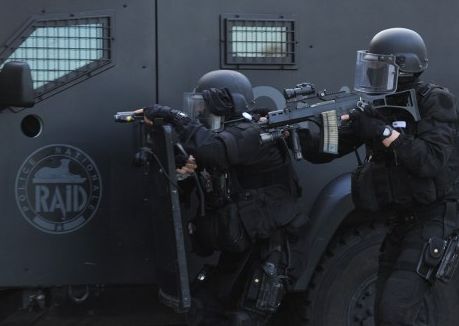 French MPs have overwhelmingly approved tough new anti-terrorism laws giving police vastly expanded powers despite claims they leave the country in a permanent state of emergency. The Bill, passed by France`s lower house of parliament by 415 votes to 127, boosts the countrys capacity to search homes, restrict movement, place people under house arrest and close places of worship. Amid government warnings that France is “still at war” and with the terror threat at maximum levels, the country`s two-year state of emergency following the Paris attacks that killed 130 people in November 2015 is about to expire. The new legislation will see many of those emergency powers enshrined in law, with limited oversight from the judiciary. The interior ministry, without approval from a judge, will be able to set up security zones when there is a threat, restricting the movement of people and vehicles in and out and empowering police forces to carry out searches inside the area. It will have more authority to shut down places of worship if intelligence agencies believe religious leaders are inciting violence in France, or abroad, or justifying acts of terrorism. Policing will also have greater powers to search private properties, if they have judicial approval, and there will be an increased ability to impose restrictions on peoples movements, including via electronic surveillance tags, if they are regarded as a threat to national security. President Emmanuel Macron has already acted to bolster counter-terrorism efforts, creating a task force in June to improve coordination among Frances multiple intelligence agencies. The Anti-Terrorism Bill has met little resistance, with a country “still on edge” after more than 240 people have been killed in France in attacks since early 2015 by assailants who pledged allegiance to or were inspired by so-called Islamic State (Daesh). In the latest attack on Sunday (October 1), a man cried Allahu Akbar (God is greatest) before fatally stabbing two cousins outside the railway station in Marseille. Four people have been arrested in connection with the attack. Meanwhile on Wednesday (October 4), anti-terror investigators are questioning five people over the discovery of a primed bomb at an apartment block in Paris. We are still in a state of war, Interior Minister Gerard Collomb has stated. We have foiled numerous attacks since the start of the year that would have led to many deaths. Marine Le Pen, the leader of the far-right National Front who ran a failed presidential bid, complained that the law did not go far enough in combating the “Islamist ideology that is waging war on us”. Benedicte Jeannerod, France director for Human Rights Watch, argued: “The concentration of powers in the hands of the executive and weakening of judicial oversight is not a new characteristic of France`s counter-terrorism efforts. “But the normalisation of emergency powers crosses a new line.” Since 2012, France has progressively tightened its legal arsenal to tackle terror threats, passing around ten different laws. Former president Francois Hollande declared a state of emergency after the wave of bombings and shootings at Paris nightspots and France`s national stadium in November 2015. It was meant to be temporary but was repeatedly extended in order to protect major sporting and cultural events, as well as this year`s presidential and parliamentary elections. The government says it has helped foil 12 planned attacks so far this year. Main points of the new legislation include: Places of worship The Bill allows the top government official in each of France`s regions to order the closure of mosques, churches or other places of worship for six months if preachers are found to have incited attacks or glorified terrorism. Investigators will not be required to provide proof of radical preaching or writings. The venue can be closed on the basis of the “ideas and theories” circulated among devotees. The management of the religious site will