A force has urged members of the public to use its website first before calling 101 after a selfie social media campaign highlighted the diverse demand placed on policing in the run-up to Christmas. 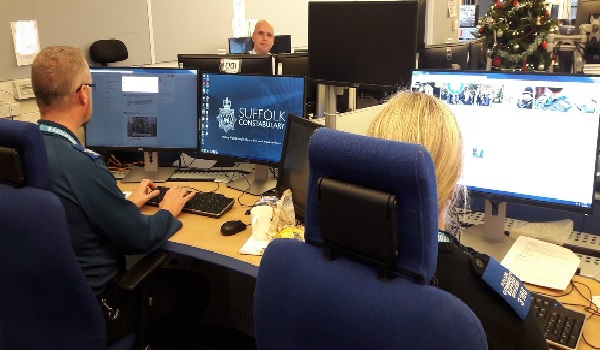 A force has urged members of the public to use its website first before calling 101 after a selfie social media campaign highlighted the diverse demand placed on policing in the run-up to Christmas. And four in ten people who engaged with Suffolk Constabularys 24-hour tweetathon were calling on non-police matters, it emerged. Using #SuffolkLive, officers and staff tweeted the details of as many calls as possible as they came into the forces contact and control room (CCR) on December 14. Within the 24 hours, 464 police incidents were created, 248 calls were received by the 999 number and 500 other enquiries were dealt with, including calls to the non-emergency 101 number. A total of 461 tweets were issued by @SuffolkPolice, which reached more than one million people online, and received more than 535 retweets and 1,173 likes. Suffolk Constabulary said the volume of calls was consistent for a Thursday in December, with a peak in the late afternoon and early evening. Around 40 per cent of calls received during the tweetathon were not police matters, with one person ringing 999 to report their phone wasnt working properly. Some members of the public praised the tweetathon, as one Twitter user @AmyYourMidget said: These #SuffolkLive tweets show how much we take the police for granted and the amount of work they really do for us. And @MrShaunFarrell added: #SuffolkLive certainly gives you an insight as to how hard modern-day policing is. Chief Inspector Matt Rose, who runs the CCR, said: “Opening up our operations through Twitter has been a great opportunity for us to demonstrate the diverse range of incidents, crimes and issues our call handlers, radio operators and officers deal with on a daily basis. We are delighted with the response to the tweetathon, with an overwhelming number of people engaging with us in real-time and asking questions. “The aim of the day was to raise awareness of the work we do, while also building confidence and understanding in local policing. The majority of our communities still think our work is predominantly about traditional policing, and responding to reports of crime, but the demand we face is far wider than this, covering all areas of community safety, vulnerability and safeguarding. Between April 2016 and October 2017, Suffolk Constabulary received a 22 per cent increase in 999 calls compared to the previous year, Chief Insp Rose added. As a result, the force has urged those with non-emergency situations to refer to its website before calling 101. The website contains information on crime prevention, how to contact the correct agency for queries regarding noisy neighbours, and also includes a reporting facility for non-injury road traffic collisions and incidents of anti-social behaviour. Chief Insp Rose said the online service will help by reducing the pressure on our control rooms and allowing staff to focus on more urgent issues. Suffolk police and crime commissioner Tim Passmore added: “I am delighted the tweetathon was such a huge success as it was able to demonstrate the huge number and variety of calls received into Suffolks Control Room. Id like to thank everyone involved in this great event. “On a more serious note, its vital people realise the different options they have for contacting Suffolk Constabulary  emergency and non- emergency calls, through social media and of course directly via the new website. This helps the constabulary provide a more focussed response and setting the appropriate priority for each contact. “Making the right call is crucial and I hope there is now a better understanding of what issues are a police responsibility and which are not.