The former Scottish Police Authority chair claims to have been told by Justice Secretary Michael Matheson it would be bad decision to allow Chief Constable Phil Gormley to return to duty. 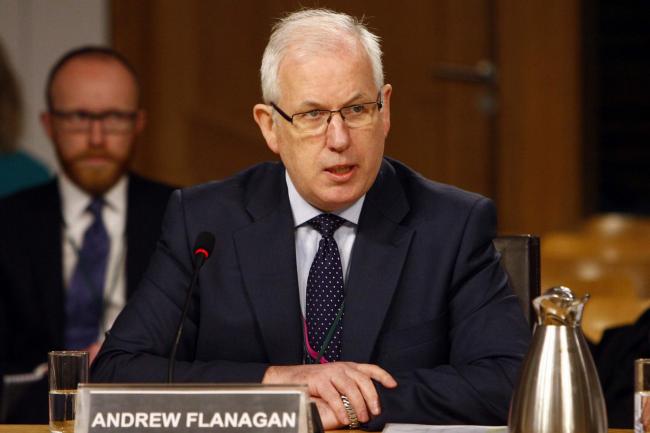 The former Scottish Police Authority chair claims to have been told by Justice Secretary Michael Matheson it would be bad decision to allow Chief Constable Phil Gormley to return to duty. Andrew Flanagan gave Holyroods public audit committee his version of events as Police Scotlands chief officer remains on special leave while the subject of four investigations by the Police Investigations and Review Commissioner (PIRC) relating to allegations of gross misconduct, all of which he denies. His testimony on Thursday (January 25) was seized upon by SNP and opposition MSPs who said this was different to the account given by Mr Matheson who said he had restricted his opinion to the process. Mr Flanagan told MSPs that the justice secretary told him in the first of two meetings on November 9 that he thought Mr Gormleys return could destabilise Police Scotland. It was only in a second meeting, an hour later, that Mr Matheson  now with three civil servants alongside him  changed tack and focused on the process behind the decision instead, according to Mr Flanagan who quit the position of SPA chair in late 2017 following criticism from MSPs. Mr Gormleys lawyer has already accused Mr Matheson of acting unlawfully in intervening in a decision of the SPA, which is supposed to be autonomous. And his legal team stressed after todays debate that the new evidence was of serious concern. Earlier this month, Mr Matheson insisted his concern had been with the process behind the decision, not the decision itself, and he had merely asked the SPA to reconsider. He told parliament at the time: This is not about an operational decision-making matter, but about the SPAs process in making a decision I am very clear that it is not the outcome of the SPAs future decision on the chief constables leave situation but the process that the SPA goes through in making it that needs to be robust and defendable. The row goes back to the SPAs decision on November 7 to allow Mr Gormley to return to work, after a period of special leave, despite a series of bullying claims against him. The SPA decided he should, but did not consult the PIRC investigating the claims, the Acting Chief Constable Iain Livingstone or Mr Matheson in advance of doing so. Two days later, Mr Flanagan told Mr Matheson of the board`s decision in a one-to-one meeting at Holyrood. Mr Flanagan told MSPs: I explained the circumstances and he told me that he thought it was a bad decision. “It was clear to me that he did not want the chief constable to return at that point. “We had a discussion about the stability of the senior team, because that was a consideration that the SPA had had. Mr Flanagan said that after an hours break in which he attended a committee, he was recalled to Mr Mathesons office, where three officials had joined the justice secretary. He said: It was clear that the Cabinet Secretary was still very unhappy, but he changed to discuss the process rather than the decision itself. I reminded him of his comment earlier that it had been a bad decision. He told me not to bother with that. We then went on to discuss some of the process itself. He said the meeting focused on what the PIRC thought of Mr Gormley returning and how to ensure the wellbeing of Mr Gormleys accusers could be protected. Mr Matheson told the then SPA chair the process was deficient without these issues being clear, and Mr Flanagan relayed his adverse reaction to the rest of the SPA board. The board swiftly reversed its decision to reinstate Mr Gormley, who remains on leave. Mr Flanagan said he was not formally directed to stop Mr Gormleys return  which would have been an overt political decision  but he did feel he had no choice but to think again. The former SPA chair said he had not expected the meeting with Mr Matheson and his officials to have been minuted  a bone of contention for the opposition parties. On Tuesday (January 23), MSPs rebuked the