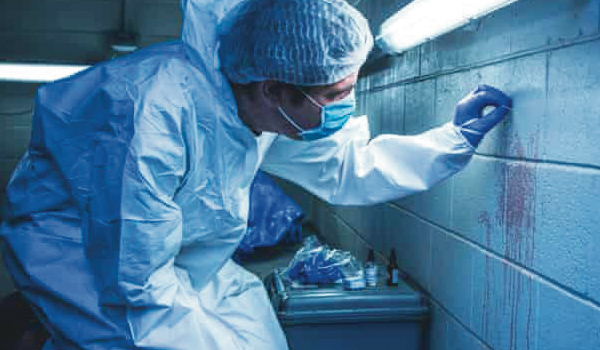 A team of researchers from Sheffield Hallam University, working alongside Israel Police, developed the new forensic fingerprint method to give police have a better understanding of crime scenes from blood evidence.

Researchers found that technology known as MALDI-MSI (Matrix Assisted Laser Desorption Ionisation Mass Spectrometry Imaging) could be applied at crime scenes for the ‘tandem’ detection of human blood and DNA-typing from enhanced fingerprints.

MALDI-MSI is a powerful technology, normally used to map drugs, pharmaceuticals and biological molecules within tissue sections. In fingerprinting, it has been adapted to provide multiple images of such ‘species’ in fingermarks, providing biometric information as well as intelligence on possible lifestyle or suspect ‘activities’ of criminals.

Researchers say the new method means that suspect identification through DNA can be carried out alongside MALDI-MSI to test for the presence of blood, so that police can also identify which biofluid the DNA originated from and the possible perpetrator.

It also helps crime scene investigators (CSIs) to associate a victim’s blood with the perpetrator’s fingermark, thus placing the suspect at the scene of a crime.

Project lead Professor Simona Francese, head of the university’s Fingerprint Research Group, said: “MALDI-MSI technology is already used in police casework, however, this advancement has widened the opportunities for it to be used.

“Our research has found that, within the system investigated, DNA profiling is still possible after the application of the method as a confirmatory test for blood detection and visualisation in fingermarks, to help police narrow down the number of suspects and better understand a crime scene.”

Professor Francese, an internationally renowned researcher in forensic and bioanalytical mass spectrometry, said the latest development was an extension of the team’s ongoing research into how fingerprint technology can provide CSIs with additional biometric information about a criminal’s activities prior to committing a crime. She said this could relate to the detection of drugs, hair and cleaning products, condom lubricants and blood, with the possibility to reliably confirm the presence of blood and its origin, whether human or animal.

Israel Police co-authored the study and is now looking to integrate the use of MALDI-MSI into its CSI and crime laboratory operational workflow covering blood evidence.

Conventionally, fingerprints are found at a crime scene by using chemical or physical treatment to visualise the marks and enable the comparison with fingerprint records on national police databases to identify a suspect.

In laboratory settings, MALDI-MSI has proven to be compatible with procedures used by CSIs across the world to visualise latent fingermarks. It has also has been found recently that it could be used for triaging crime scene marks through the determination of the sex of an individual.

The research is EU-funded through the European Cooperation in Science and Technology’s COST Actions programme.

The university’s partnership with Israel Police has stemmed from longstanding links in two international networks – the International Fingermark Research Group and the European Network of Forensic Science Institutes. The funding has enabled Ravell Bengiat PhD from the Division of Identification and Forensic Science in Israel Police to visit the Centre of Mass Spectrometry Imaging at Sheffield Hallam University to undertake the research.