UK forces are growing their status as champions of diversity as emergency services take the lead as LGBT-inclusive employers, policings portfolio head believes. 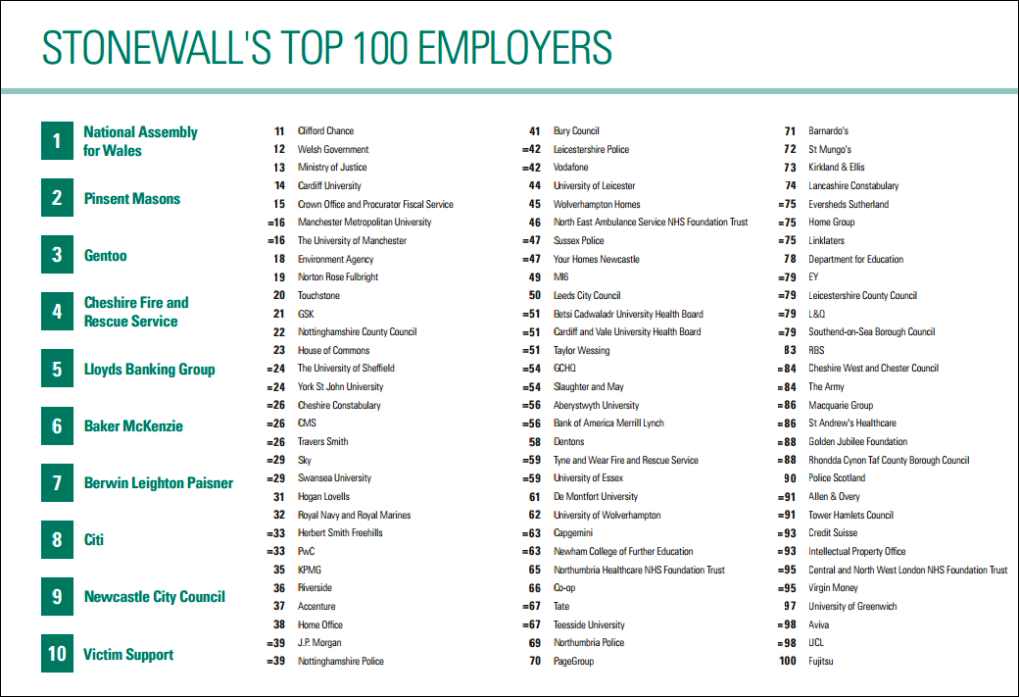 UK forces are growing their status as champions of diversity as emergency services take the lead as LGBT-inclusive employers, policings portfolio head believes. Seven police forces and two fire and rescue services increased the representation by 50 per cent in the latest Top 100 employers list, compiled by lesbian, gay, bi and trans equality charity Stonewall. And government minister Richard Heaton claims the Ministry of Justice (MoJ)  which was listed in 13th place in the Stonewall Top 100  is a better place to work for its LGBTQ+ inclusion  making it a stronger supporter of a safe and fair society. Stonewalls annual review has this year, for the first time ever, marked employers specifically on trans inclusivity, in addition to their work on lesbian, gay and bi inclusive policies. Assistant Chief Constable Julie Cooke, the National Police Chief Councils LGBT lead, said she was delighted at the progress of emergency services in the Stonewall chart, adding: I hope it goes some way to show the public that well continue to champion inclusivity and diversity and reassures them that no matter what, the police are welcoming and supportive. Im really pleased to see that there has been improvements made and I hope that this openness and determination to continually do better encourages more people to consider joining the police in the future. Although this is something I am hugely proud of, we mustnt become complacent. We must continue to embrace each other and the public we serve and by doing so I hope further improvements can be made. Cheshire Constabulary tops the force rankings at?number 26 in this years workplace equality index, joined by new entries Northumbria Police at 69 and Lancashire Constabulary which has leapt 43 places since last year to come in at 74. Sussex Police, first recognised ten years ago by Stonewall, move up 32 places to a rank of 47 (79 in 2017). Nottinghamshire Police (39), Leicestershire Police  in the list five years running  were 42nd with Police Scotland completing the force numbers at 90. Cheshire Fire and Rescue Services led the way for emergency services, climbing the rankings for a second successive year, moving to fourth position overall (eighth in 2017, 13th in 2016). Tyne and Wear Fire and Rescue Services was the highest new entry in Stonewalls list  coming straight in the top 100 at 59 overall. Although her Merseyside force did not make it into the listing, Ms Cooke said she appreciated how important it is that all officers and staff feel welcomed into our organisation and that forces value difference and understand the benefits of a diverse workforce. Merseyside Police champions an LGBT Allies programme that supports LGBT colleagues and puts the needs of these communities at the heart of policing, added Ms Cooke. We are immensely proud of this scheme and hope this continues to encourage all colleagues to be visible in their allegiance and raise the profile around LGBT matters in the workplace. Having a diverse workforce reflects our vibrant communities up and down the UK and allows us to police effectively and compassionately. Giles York, chief constable of Sussex Police, said:?We were first recognised for this achievement ten years ago, and we have continued to improve year on year to once again receive recognition of our commitment to diversity in our workforce. We are proud to be an inclusive and welcoming organisation and will continue to lead the way in developing services informed by the people we serve. We are privileged to have such a dedicated and enthusiastic LGBT staff network and external LGBT public advisory group. On hearing the news of its inclusion, Lancashire Constabulary tweeted: We`re incredibly proud to have jumped 43 places and are now in the #StonewallTop100. We want Lancashire Police to be a place where every officer and member of staff can be who they are and feel valued. Chief Inspector?Ian Mills added: We are committed