Forces challenged to maintain progress in age of ICT acceleration

Policing must come together to work out the next step on its ICT journey, leading figures have said. 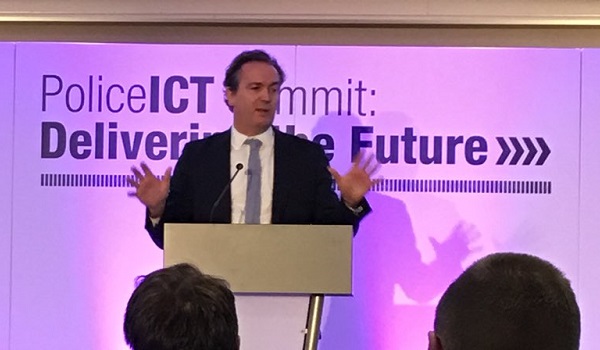 Policing must come together to work out the next step on its ICT journey, leading figures have said. Forces risk getting left behind other parts of the public sector if they do not respond to emerging threats and opportunities around technology, according to Policing and Fire Minister Nick Hurd. Addressing the Police ICT Conference in Leicestershire last week, Mr Hurd outlined the great progress that has been made so far in ICT  but warned the service must continue to adapt. The Home Office has promised to be an increasingly active player in working with forces to address technological challenges. Mr Hurd said ICT is the biggest challenge and the biggest opportunity facing British policing at this moment in time. How do we work together in a smarter way to make sure we use modern digital technology to the most effect in the battle against modern crime? he added. How do we embrace and be as smart as we can be in using the technology that is ubiquitous out there? How do we bring that into our system and use it for public good? The conference, held on January 17 and 18, heard that policing has entered an age of acceleration with the opportunities presented by technology advancing at an increasingly rapid pace. Recent years have seen the introduction of cloud-based services, mobile devices becoming widespread and an explosion of data available to forces. Policing-led programmes such as the Digital First portfolio are also preparing to revolutionise interaction with the public and how public services can distribute digital evidence. The Home Offices 17 ongoing projects, such as the Emergency Services Network and the National Child Abuse Image Database, will also prompt a tsunami of change, the programme leads said. These advancements have prompted a revolution in how forces operate and work alongside each other. Chief Constable Giles York, national lead for Digital First, highlighted an incident where Surrey and Sussex Police borrowed learning from Welsh forces to introduce the Niche records management system across both forces rather than doing it individually. This learning was then shared with forces in the East Midlands, six of which are now using the same platform. That was just unimaginable six or seven years ago, and there are other instances in place as well, he added. However, delegates also heard that further change will be needed to keep up with the emerging opportunities. Around £800 million is currently spent servicing sub-optimal legacy systems that could be updated, and victims of online crime are getting the worst deal of all kinds of offences, Mr Hurd said. Mr York raised the need to provide further training to officers who are less confident with technology, describing any failure to make the most of equipment like mobile devices as unforgivable. And Sussex police and crime commissioner Katy Bourne, chair of the Police ICT Company, added that forces must work out how they can present new technologies to the public without damaging their confidence. To help achieve this reform, Mr Hurd recommended forces begin thinking about how they can learn from each other and share best practice. He also questioned whether there is a genuinely collective vision of what a digital enabled service should be capable of, and challenged forces to consider how they can make the case for further investment. Approximately £330 million will be given to forces for ICT reform this year and an additional £490 million will be allocated to the Home Offices projects, including developing the Emergency Services Network and the National Automatic Number Plate Recognition Service. A total of £175 million of Police Transformation Fund money is paying for another 100 projects, which Police Reform and Transformation Board chair Paddy Tipping said need direction. He added that forces must ensure what they already have is being invested well given the upcoming spending review in 2020.