Police officers have taken to the streets armed with pushchairs and wheelchairs to crack down on drivers who block the pavement when they park their vehicle. 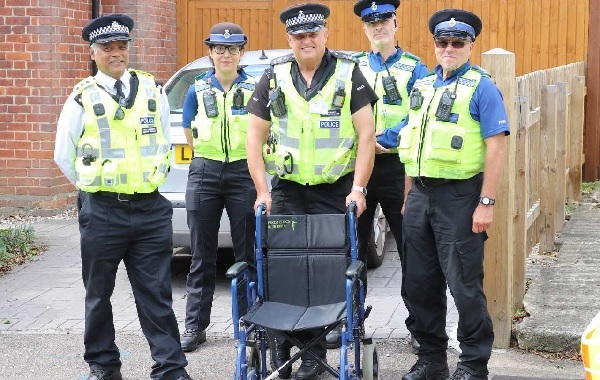 Police officers have taken to the streets armed with pushchairs and wheelchairs to crack down on drivers who block the pavement when they park their vehicle. Operation Pram  the brainchild of Chief Inspector Gerry McDonald, who leads the east Hertfordshire Community Safety Partnership  was launched last week following a number of complaints from local residents about inconsiderate drivers. Officers from the Safer Neighbourhood Team take prams and wheelchairs down the pavement, and if they are unable to get past, a ticket will be placed on the vehicle that is blocking the path. Chief Insp McDonald said the officers will be conducting these patrols on a regular basis, where operationally possible. As the new school term starts in a few weeks, he hopes the timing of the operation will capture and educate the new influx of parents who will be dropping off and collecting their children about safe and legal parking. We have used both a pushchair and a wheelchair to demonstrate how difficult it is to navigate the pavement when cars are parking inconsiderately and dangerously, Chief Insp McDonald said. This is both a quality of life issue and a safety issue. When people who are pushing a buggy or a wheelchair, using a mobility scooter or holding a young childs hand have to move into the road because the pavement is blocked, that is dangerous for both them and motorists. Anyone driving a car would not be expecting pedestrians to be in the road. The issue of dangerous parking covers the majority of east Hertfordshire, and the force has confirmed it will be rolling out Operation Pram to other areas. Officers carried out their first patrol in Hertford on Wednesday (August 16) and their latest in Bishops Stortford on Friday. Chief Insp McDonald said the overarching aim of the operation is to educate the public in east Hertfordshire about safe, legal and appropriate parking. We understand that parking is an issue in some parts of the Community Safety Partnership, especially some parts of Hertford and Bishops Stortford where the roads and houses were built long before cars were a big part of everyday life, he added. Therefore, we are sympathetic to the difficulties faced in these areas and officers will be using their common sense when issuing fixed penalty notices. However, some of the parking pressures can be relieved if people park further away from their destination and walk the last part of their journey, or by using public transport where appropriate.