Lochaber and Skye Police has been praised for its great creative use of social media after leaving an open letter to a woman on Twitter encouraging her to tell officers she is a domestic abuse victim. 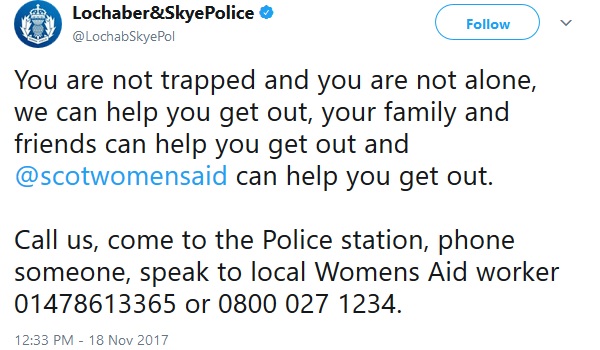 Lochaber and Skye Police has been praised for its great creative use of social media after leaving an open letter to a woman on Twitter encouraging her to tell officers she is a domestic abuse victim. On Saturday (November 18) afternoon, the Scottish force made a series of tweets aimed at a young woman who the force believes is at risk of domestic abuse from her partner. A later posting revealed that the tweet was intended for anyone who may be at risk. The tweets read: A letter to a young woman in #Skye. We know you follow this account and want you to see this. Weve told you previously that we think you are at risk of domestic abuse from your partner. We want to help you and we are doing with other agencies to try to keep you safe. You might not see us, you might not even like us being involved but we are always thinking about how we can help you. Your family and friends have told you they think you are in danger  they support you and want you to be safe. We think hes probably told you, it wont happen again, Im sorry, Ill change, hes maybe even told you that its your fault  ITS NOT. The violence, threats, degrading comments and controlling behaviour are not the life you need to lead, it can be better. Lochaber and Skye Police ended the series of tweets by suggesting the woman goes to the police station or speaks to her local Womens Aid worker. Marsha Scott, chief executive of Scottish Womens Aid, said the tweets were a great, creative use of social media. Lochaber and Skye Police are trying to reach out in a different way which is fascinating and exciting. Scottish Womens Aid runs a 24/7 national helpline for women who have experienced domestic abuse, as well as a network of local support across the country.