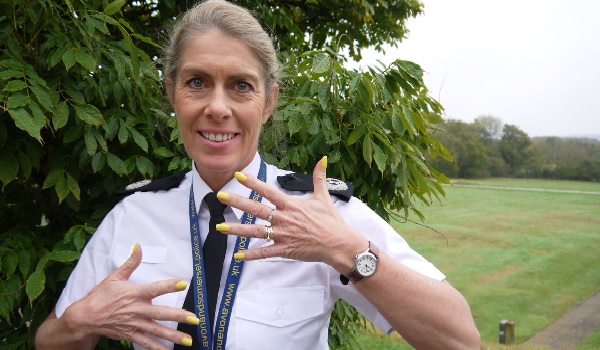 An awareness campaign involving police officers wearing nail varnish has prompted three reports of suspected human trafficking, a police and crime commissioner (PCC) has confirmed. Anti-slavery charity Unseens Lets Nail It campaign on October 18 saw social media filled with Avon and Somerset Constabulary officers brandishing colourful fingernails and linking to advice about modern slavery in nail salons. The campaign came under heavy criticism on social media and in the national press, as the Daily Mail claimed their increasingly bizarre gimmicks are undermining the job of tackling crime. But Sue Mountstevens, Avon and Somersets PCC, confirmed that as a result of Lets Nail It, three reports of suspected modern slavery in nail bars and a car wash are being followed up. Deputy Chief Constable Sarah Crew said the campaign has made a real difference to lives. Someone who was going to pay £5 for a car wash now wont, she added. A victim who was feeling alone and helplessness will feel brave enough to seek help because they now know that they can, how and from whom – and that we will believe them. “And a criminal gang will be deterred because they know that they are no longer in the shadows and their business model will be disrupted as a result. Ms Mountstevens added: Modern slavery is a crime that many find hard to believe still exists in this day and age, but sadly it does. “Whats worse is modern slavery often occurs in everyday situations and thats why we all have a role to play in being a louder voice for those who are trafficked and exploited. “Through the painting of nails, the campaign raised awareness that slavery is occurring right now and in plain sight, as well as educating people how to spot the signs and how to report it. I hope we continue to see this positive impact. Former North Yorkshire Police Deputy Chief Constable Peter Walker was among those that criticised the campaign. He told The Sun many social media posts that lack in common sense could compromise respect for the police service, and questioned whether forces can afford to carry out campaigns like Lets Nail It. Mr Walker added: Quite properly, people are asking themselves: Havent the police got anything better to do? You can paint all the rainbows you like on the side of the patrol car, but the job is to put crooks in the back seat. “Every officer not tasked with patrol or detective work means the demand is greater on all who remain. The message came back to cut the c**p and focus on the issues that meant the most to the majority of people. However, not every member of the public agreed with Mr Walkers comments, as a resident from Cardiff told Ms Mountstevenss office: I read that you`ve had a lot of criticism for your painted nails to highlight slavery issues in places like nail bars. I don`t live in your area but it`s an issue where I live too and I just wanted to let you know that I support your idea. It worked, too  it`s on the BBC website and people are talking about it! Well done. Justine Currell, executive director of Unseen, said: This is exactly the kind of response we want from the public  an understanding that people are being exploited in nail bars, and then to have the confidence to pick up the phone and speak to someone confidentially about it.